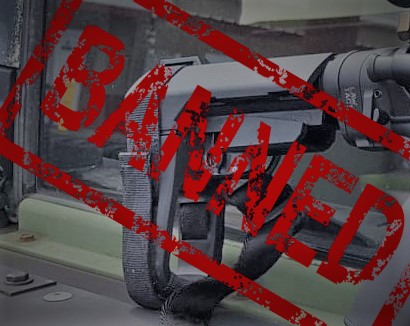 If you own a pistol brace listen up because this affects you. A recent post circulating Facebook may just highlight things to come. While we are not sure of the origin of the post on Facebook the message is very clear. A very well known firearms lawyer stated that the ATF will likely be issuing a determination in the next week or two regarding some firearm braces at the request of the President.

The image posted was a screenshot. however, searching for the post turns up nothing. 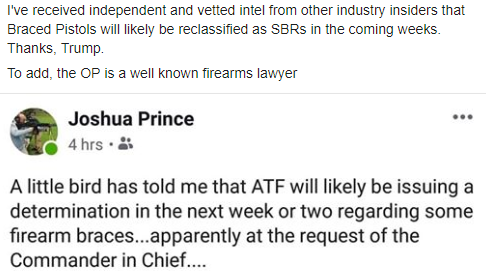 The author of the post goes on to list actions second amendment supporters can take to bring awareness to this looming infringement.

However, All we have to go on is a single post. Was this post recent or could it have been in reference to the OAL decision regarding pistol braces not too long ago. We dont know because Facebook doesnt have dates on post… just one day ago, 4 hours ago, 2 minutes ago etc. We dont know when this was screenshotted so its hard to tell the legitamacy of the post.

However, another page did bring up a solid point even with the bump-stock there was post from major manufacturers posting EVERYWHERE regarding the looming ban. So far  all we have is the aforementioned screenshot to go off of though because it is a leak and therefore may not have made the rounds yet. 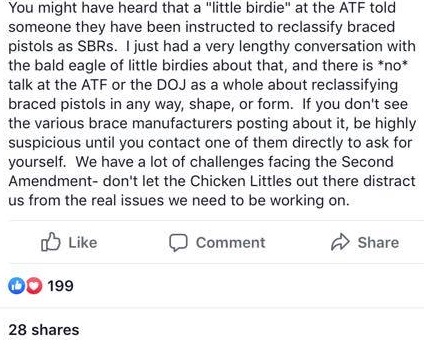 So now the question remains what should we do. If we draw attention to it and it is nothing and simply a case of paranoia it could go the way of the overall length ruling. O.A.L. with a foregrip on a braced pistol was not on the ATFs radar until some jackass started harassing them with questions which resulted in them ruling on vertical foregrips on pistols. Which essentially fucked over alot of people.

But what if its not paranoia and it is a legitimate concern. The action is for you to decide.

What do you think? legitimate concern or Facebook shitposting?