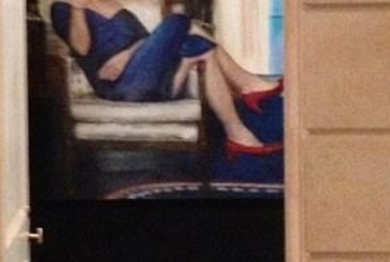 Feds discovered an interesting “painting” inside the billionaire pedos mansion. Honestly it looks more like a blown up photo. Things to note. Yes the picture sucks so you cant tell for sure but look on the floor. Thats the outline for the presidential seal on the floor which further goes to support the fact that its Bill in a dress and heels.

The DailyMail writes that Jeffrey Epstein had a bizarre portrait which appeared to be of Bill Clinton in a dress hanging in his Manhattan mansion, DailyMailTV can reveal.

The picture depicting the former president apparently lounging on a chair in the Oval Office, wearing red heels and posing suggestively in a blue dress redolent of Monica Lewinsky was in a room off the stairway of the Upper East Side townhouse.

The painting was secretly snapped inside the pedophile’s lavish $56 million home in October 2012, four years after Epstein completed his sweetheart deal for prostitution of a minor and seven years before he was accused of running a sex trafficking ring of underage girls.

The source, who asked to remain anonymous, was visiting Epstein to present a business proposal – an encounter with the pervert which included spotting a girl who seemed to be 14 waiting to see the…

This case just keeps getting weirder and weirder everyday and now that the shitshow has started we’re pretty sure theres no distracting anyone from it at this point. While the title is satire we’re pretty sure this isnt the only reason the pedophile isnt wasting oxygen on this plane of existence anymore.