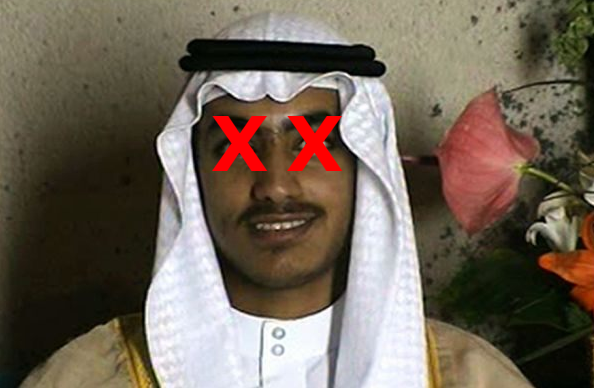 Good riddance. An airstrike has successfully put a stop to the end of the Bin Laden line of succession. Hamza like his father also released video messages calling for attacks on the United States to avenge his fathers death. Not much detail has been released from the pentagon and even the president did not want to comment.

According to the BBC documents seized in that raid suggest Hamza Bin Laden was being groomed to take over the leadership of al-Qaeda.

NBC News reported that officials would not provide details of where or when Hamza apparently died or if American forces played a role in his death. The news outlet added that it was unclear if the U.S. had confirmed the death of the militant who has been seen as an increasingly serious threat.

The State Department in February had offered a $1 million reward for information leading to Usama bin Laden’s son.

He is not the head of  Al Qaeda but he has risen in prominence within the terror network his father founded, and the group may be grooming him to stand as a leader for a young generation of militants.

Which is understandable at the moment they dont want intel or any classified details leaked on such a high profile strike which could result in retaliatory strikes against those responsible.

Again, good riddance. The world is now a safer place now that bin laden is not a part of it.