Unless you have been living under the world’s largest rock recently (i.e. Liberal propaganda), you are well aware of the growing threat that is ISIS in the Middle East. You are also aware of the fact that ISIS has essentially become the most evil entity on the face of the planet, the likes of what has not been seen since the Nazis in Europe during WWII. From beheading several people in front of a worldwide audience, to mass executions of innocent people all over the globe, to burning people alive, it is no question that this “organization” is evil and simply does not have any care or value for human life. These facts are indisputable regardless of what side of the political spectrum you may be on.

So with an evil organization such as ISIS running amok, with their deeds and actions well documented on the worldwide stage, you would think our world leaders, most specifically the current leader of the free world and the most powerful military this planet has ever seen, President Barack Obama, would take action against these barbaric heathens right? Did we not say, as a human race, after the atrocities and horrors committed by the Nazis during WWII and The Holocaust that we would never allow something so heinous to happen ever again? Not to mention the fact that ISIS’ deeds have been BROADCAST WORLDWIDE AS THEY ARE HAPPENING! At least the Nazis’ evil deeds were never fully exposed until later in the war and afterwards. I mean, what other way is there to put it? ISIS IS HAPPENING RIGHT BEFORE OUR EYES AND NOTHING IS BEING DONE TO STOP THEM!!! 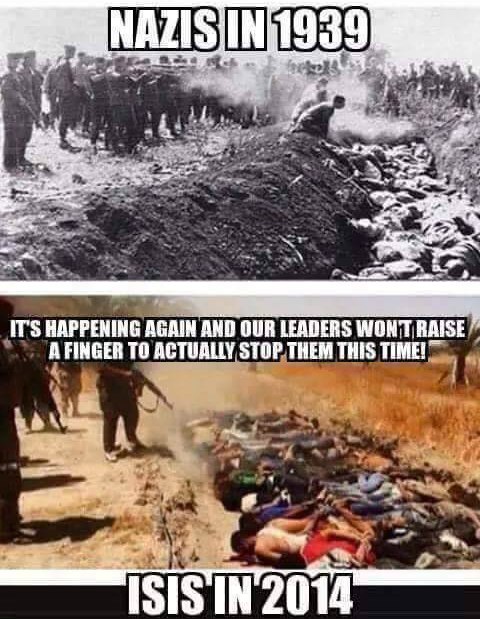 But before we spiral off into an emotion filled rant here, let’s have a quick history lesson.

Way back in 1916, the first “Progressive” president in United States history, Woodrow Wilson, won re-election under the slogan “He Kept Us Out Of War.” Ironically enough, the United States was forced into WWI during his second term after it was discovered that German submarine warfare was sinking American merchant ships. Simply put, it took a direct attack on the United States under a Democratic president to force us into the war.

The Nazis had control of most of Europe, had brought Russia to its knees and were just miles outside of their capital, and were bombing the bejeezus out of Great Britain. Yet, despite all of this, Democratic president Franklin Roosevelt still wouldn’t enter the war. It took the Japanese bombing Pearl Harbor for the administration and Congress to finally declare war on Japan, Germany, and The Axis. Simply put, it took a direct attack on the United States under a Democratic president to force us into the war. 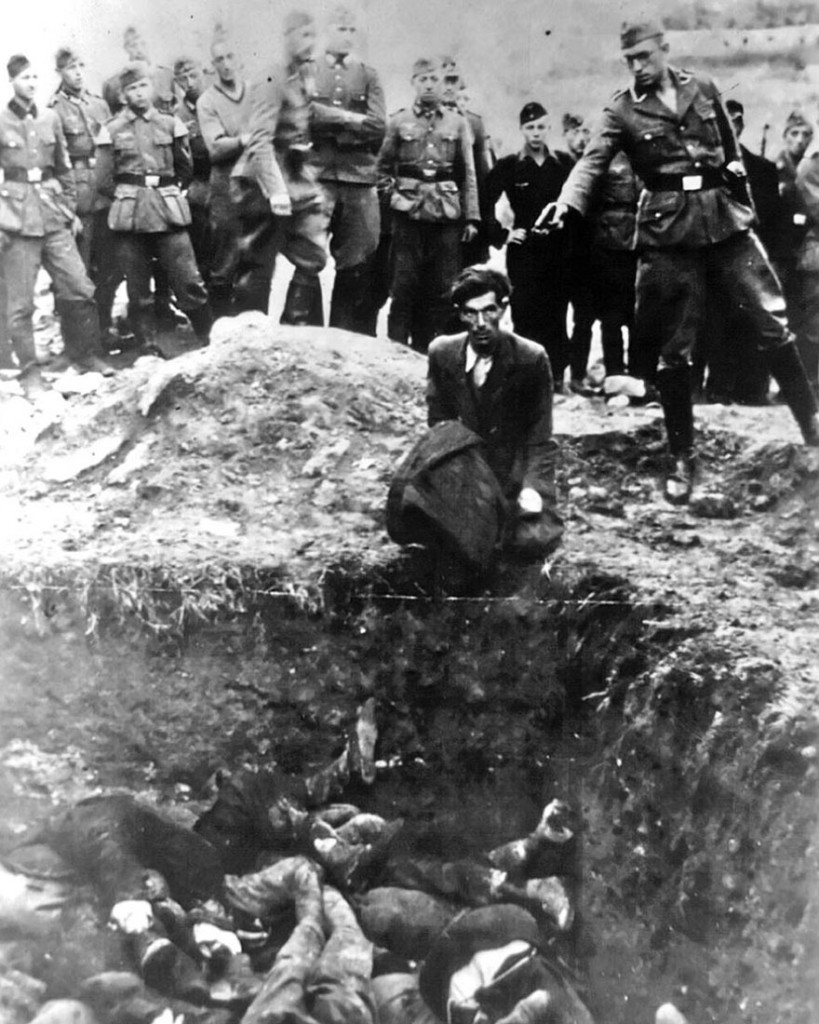 So what are we trying to get at here? Why would it matter that these two Democratic presidents waited and waited until America was finally attacked directly to declare war and send hordes of troops overseas to fight these organizations and nations of evil? Most Liberals, and even a portion of people in the center of the political spectrum, would agree that these conflicts overseas never concerned us until we as a country were directly attacked. Why should we send hundreds and thousands of troops overseas to fight and die when these conflicts don’t directly concern us?

Think about this. What if the United States had entered WWI before the First Reich of Germany had gained power and worked its way halfway through France and dug trenches across the entire continent? You are probably already aware of the nightmares of trench warfare and the casualties it caused. Do you think we could have limited the amount of casualties as opposed to entering the war late like we did? Do you think, if the United States had entered the war once the alliances broke down and the entire continent was at war we could have limited casualties by nipping the entire thing in the bud?

Nazi Germany invaded Poland in 1939, but the United States didn’t enter the war until 2 years later in 1941, and DDay, the largest military offensive in world history, didn’t happen until 1944, a whole 5 years after the beginning of the war. We already know the massive amount of casualties lost during the Normandy Invasion, not to mention during the course of the entire war up to that point. Think about it. Do you think we could have prevented Normandy from happening had we entered the war in 1939 when it began rather than later when the Nazis had gained so much more power and resources? If the United States had confronted Germany shortly after the invasion of Poland would the Holocaust have happened? Would we have prevented the estimated 50-85 MILLION casualties that happened over the course of the war? No, we probably wouldn’t have prevented casualties entirely, but we definitely would have lowered that number considerably. 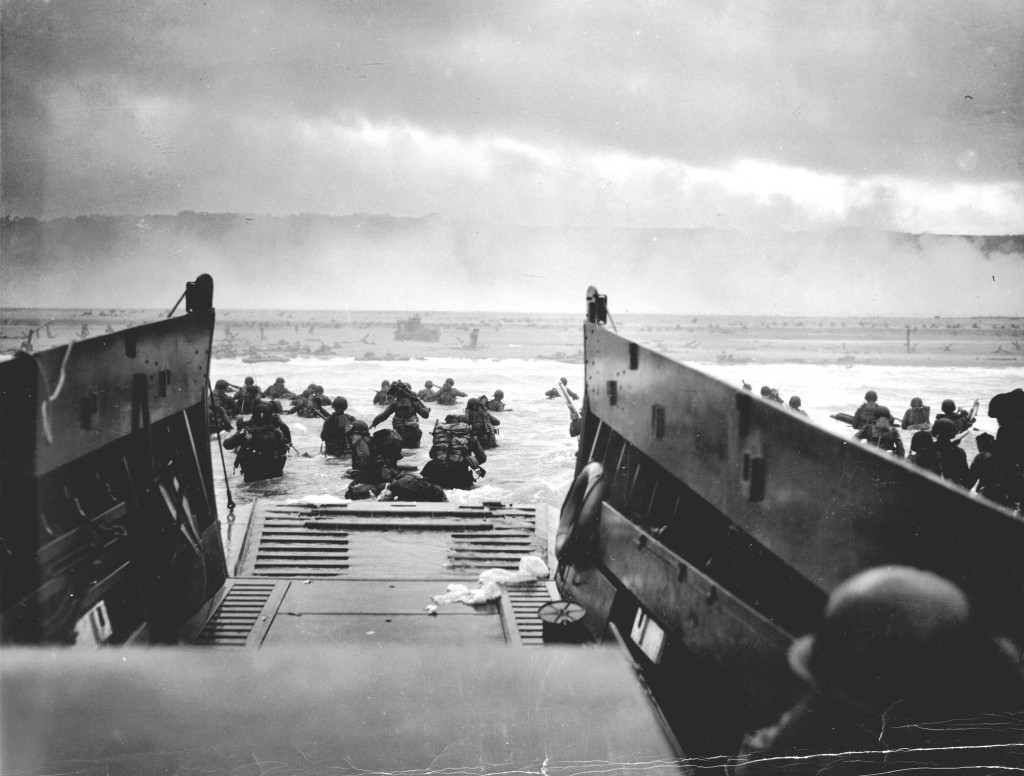 ISIS is raging throughout the Middle East, yet our Democratic president Barack Obama insists that ISIS is not our war and we have no business being over there, let alone putting troops on the ground that may result in casualties. Now remember everything we just talked about and tell me you don’t see parallels between WWI, WWII, and ISIS? I don’t want to say that ISIS could be the start of WWIII, but if we continue to leave them alone, they will continue to grow in number, they will continue to acquire resources, and they will continue to grow in power and influence. It has already been reported that several people from Western countries are attempting (successfully and unsuccessfully) to defect to ISIS to join them in their fight. What happens if ISIS takes over ALL of Iraq and Syria? What happens when ISIS starts to work their way across Northern Africa and into Europe? If it ever gets to that point, or close to that point, the United States would inevitably have to intervene and put troops on the ground to end it resulting in certain massive casualties.

So again, ask yourself, would it be better for us to intervene and directly confront ISIS NOW and limit enormous casualties down the road? Or should we wait like we always have under Democratic presidents and pay the ultimate price later on, with extremely high numbers of casualties of both soldiers and innocent civilians?