A recent press release from Franklin Armory states that Shopify has updated their AUP (Acceptable Use policy) more specifically the”Restricted Items” in regards to firearms and firearms related parts. The changes basically copy California’s strict gun laws. Hundreds if not thousands within the firearms industry will be forced to find a new E-commerce solution. While some businesses websites have been untouched some have already been shut down even though it clearly violates their contract.  “The firearms industry is under an unprecedented attack from the leading facilitators of interstate commerce that deny legitimate firearm businesses access to important structural supports of modern business.” Counsel for Franklin Armory®, Jason Davis, stated.

Franklin Armory the Makers of the Binary Trigger

We have provided a copy of Shopify’s recently updated policy below… we may have made some slight changes to it as well Seriously read this dumb-ass shit they have pretty much copied from Commieforniastans gun laws. Even using nomenclature that is completely made up or incorrect that would make even the biggest gun newb cringe.

*only if for use with a semi-automatic firearm

My business has been summarily disabled by @Shopify against our contractual terms. pic.twitter.com/sTKEsrvnBV

Spikes Tactical has also fallen to Shopify’s bullshit. According to Cole Leleux, general manager of Spike’s Tactical, “This decision will have significant ramifications to our business and should concern every online retailer and Second Amendment supporter,” Because of shhopifys proprietary system all of the information and work they have put into it cannot be transferred to a new system. Leleux also added, “We have invested more than $100,000 in the development of our Shopify store, which will disappear once these policies go into effect,” 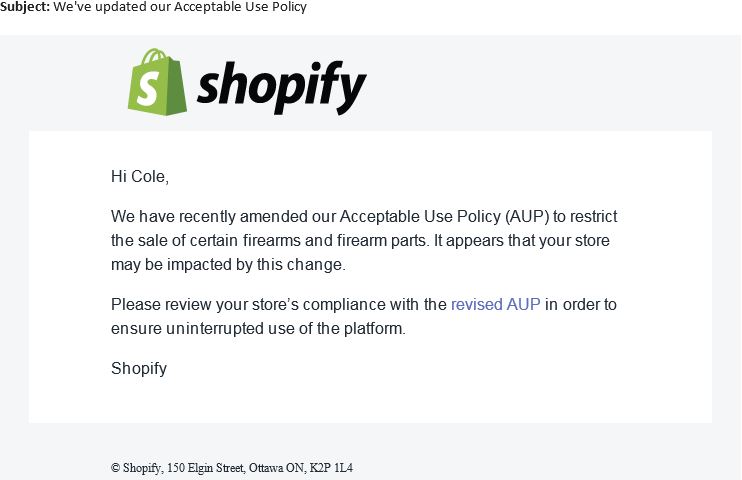