A dramatic video emerged out of Texas giving a birds eye view of a highway chase in San Antonio. The helicopter can be heard communicating with troopers as they pursue the suspect down the highway. Eventually the suspect loses a tire and is blocked by a trooper shortly after. The suspect opens his door, reaches under his seat and takes a defensive position behind his door as he approaches the trooper. A gun battle ensues and the trooper is shot in the right arm. The suspect is dropped seconds later by a responding officer with a rifle.

Montelongo is then seen opening the door to the car and the person in the helicopter can be heard warning troopers that Montelongo was reaching under the floorboard.

“He’s under the floorboard guys. Be careful. Be careful,” the person in the DPS helicopter tells troopers on the ground.

Montelongo is eventually stopped on I-10 by a trooper who parked his vehicle to block highway traffic. The video shows Montelongo draw a weapon and shoot a trooper in the arm before another ground trooper returns fire and shoots Montelongo.

One trooper rushes to the other’s aid, making a tourniquet on the official’s gunshot wound on his right arm.

The wounded trooper was taken to University Hospital in the DPS helicopter and survived the shootout.

This video greatly illustrates how much of an important asset helicopters are to law Enforcement.

However, what caught our eye was towards the end of the video when a tourniquet was used to stop the arterial bleeding from the troopers wounds. The situation highlights the importance of not only keeping a tourniquet handy but being able to know how to use it should the situation arise. The officer lost a lot of blood much to the point you can see him swaying as he sits on the hood of the car and had a tourniquet not been available the situation could have been far worse.

It is also important to make sure that if you do purchase a tourniquet you buy genuine equipment. There are many available online. But the problem that arises is many are cheaply made knockoffs often using cheap materials that could fail in the event of an emergency.

There are a variety of different types of tourniquets available. However, only one we’d trust!

The C-A-T® Tourniquet is quickly becoming the norm. Adopted be military and law enforcement agencies everywhere The C-A-T® is a true one-handed tourniquet proven to be 100% effective by the U.S. Army’s Institute of Surgical Research. Tests proved that the C-A-T® completely occluded blood flow of an extremity in the event of a traumatic wound with significant hemorrhage. 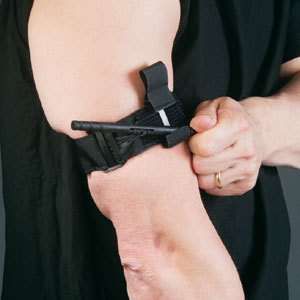