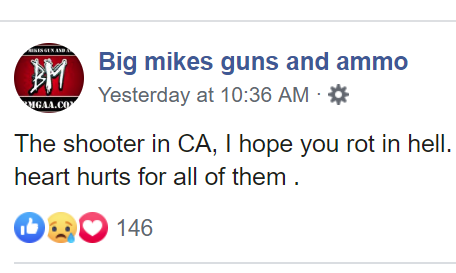 The owner of the Nevada based gun store who sold the rifle used in the Gilroy food festival shooting has released a statement that he wants the shooter to, “Rot in hell.” According to FoxNews The comments on the Facebook page of Big Mike’s Gun and Ammo, based in Nevada, come as police continue to comb ***Name Redacted*** scant social media presence for any clues that might reveal a motive in the attack. The Associated Press reported that investigators noted an Instagram account in Legan’s name posted twice in the minutes before he sprayed bullets into the Gilroy Garlic Festival crowd, wounding at least 12 and killing three, including a 6-year-old boy.

“The shooter in CA, I hope you rot in hell,” the post on Big Mike’s Gun and Ammo‘s Facebook page stated. “We pray for the victims. My heart hurts for all of them.”

An earlier post signed by “Mike” described the shop as “a small home business” that sells to people “who we think are upstanding citizens to promote safe sport shooting.”

“I did not know this individual. He ordered the rifle off my internet page. When I did see him, he was acting happy and showed no reasons for concern,” the post stated. “I would never ever sell any firearm to anyone who acted wrong or looks associated with any bad group like white power. Everyone is my brother and sister and I am mourning for the families.”

Police on Monday said ***Name Redacted*** legally purchased the rifle on July 9 in Nevada, where buyers must only be 18 years old…