I want to start by saying we are not condoning with what the room mates and landlord did nor are we siding with them nor are we saying she should not have firearms or is not entitled to her second amendment rights but this situation is entirely fucked up. According to FoxNews a Harvard graduate student was told she has to move out of her apartment after her roommates found her legally owned firearms “uncomfortable” and anxiety-inducing.

Leyla Pirnie, a 24-year-old Alabama native, told the Washington Free Beacon that she felt roommates violated her privacy after searching her room without her consent and then confronting her over gun ownership.

“When I asked them why they were in my room to begin with, they each came up with completely contradicting stories … but one comment struck me in particular: ‘We saw that you had a MAGA hat and, come on, you’re from Alabama … so we just kind of assumed that you had something.'”

“When I asked them why they were in my room to begin with, they each came up with completely contradicting stories (none of which made any sense), but one comment struck me in particular: ‘We saw that you had a MAGA hat and, come on, you’re from Alabama… so we just kind of assumed that you had something,’” she said.

“I asked why they didn’t just call me and ask me before intruding. One of the girls responded that fear took over her body and she felt compelled to search my room until she found proof. … I cannot make this up.”

“Nobody has bothered to question, ‘Well, why do you want to have protection? Could it be because you’ve experienced something where you need to protect yourself as you see fit?’” she said, noting that she was in a physically abusive relationship in the past. “I have a real and legitimate reason as to why I want to protect myself.”

Her room mates had no place searching her room while she was away. She is entitled to her second amendment rights and no one has the right to tell her otherwise. Many are taking her side as they should as this was a clear violation of not only her privacy but her rights as well!

“You’re from Alabama….and you have a MAGA hat so we figured you had something”…Harvard roommates searched her room to find legally owned gun. #LeylaPirnie your roommates are immature babies who broke the law. #Harvard #GrowUp https://t.co/PB4mfL6KAz

Harvard graduate student was asked to move out of her apartment because she owned firearms (legally).
When she was not home her roommates searched her room and found her guns.

If anyone knows Leyla Pirnie, tell her to DM me

The request that the student, Leyla Pirnie, move out came after her roommates searched her room while she was not home and found her firearms. That prompted one of the roommates to email Lewis requesting he verify that Pirnie was in compliance with applicable firearms laws obtained by the Washington Free Beacon. 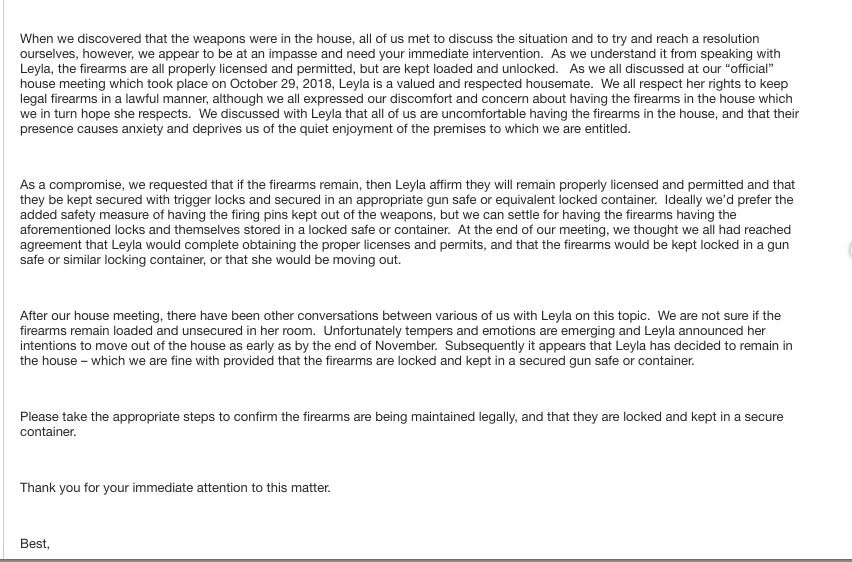 But, and I’m sure we’re going to catch some shit for this, the way the letter reads they were ALLEGEDLY hidden LOADED and UNSECURED in the room. If there is any truth to that statement in the email it does bring up some rather legitimate concerns. Why were her firearms left unsecured while she was away? Put them in a safe with a combo your mouth breathing room mates and their idiot friends don’t have access too.

You know how we preach the responsible gun owner thing? Well, there is a reason for that. We show you VARIOUS ways to secure your firearm whether on your person, in your dwelling, or in your vehicle. This type of shit is exactly why! If you are not going to have your firearms on your person they need to be secured in a safe, or guarded by Cerberus, or locked inside Mt. Doom, we don’t care as long as it is secure and out of the hands of those meaning to do you or others harm. Meaning that your nosy room mates, kids, or your mentally unstable uncle rick isn’t going to get a hold of them.

Again we are not condoning what the room mates and landlord did nor are we siding with them nor are we saying she should not have firearms or is not entitled to her second amendment rights but this situation could have been avoided entirely if they were secured out of reach of the nosy libtards she was living with.

The second Amendment is under attack by the left. One of the best things we can do to stop them is to not give them the ammunition they need to continue their advances. Be an RGO. Responsible Gun Owner. Practice Gun Safety and secure your firearms!