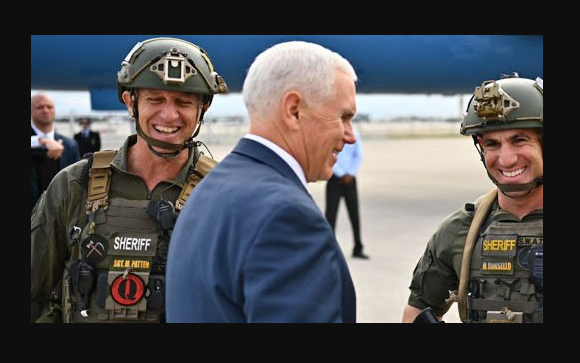 A florida sheriffs deputy wore a Qanon patch while greeting the Vice President. The Patch has to do with the conspiracy theory that centers around an anonymous source, Q, who is trying to tell the world about a secret battle being waged by Trump and special counsel Robert Mueller against a pedophile ring filled with celebrities and political elites who have been covertly running the United States government for decades. Today, Mike Pence posted a photo on Twitter with a Flordia law enforcement officer wearing a QAnon patch for sale on Amazon pic.twitter.com/vnOkk1l5Ee

ABC17 Writes Vice President Mike Pence’s official Twitter account on Friday posted — then deleted — an image showing the vice president with a law enforcement officer who appeared to be wearing a patch often associated with the conspiracy “QAnon.”

The post appears to have been deleted and replaced with a new, similar post without the image of the Broward County sheriff’s office sergeant who was wearing the patch. The tweet thanks law enforcement officials for their help during Pence’s visit to Florida on Friday.

“Grateful for the courageous members of law enforcement who helped with my visit to Florida this afternoon. Thank you for everything you do to help keep our communities SAFE. Great to meet you!” the new tweet reads.

“Obviously, we were not aware,” Coleman-Wright said. “The patch is not authorized by BSO. This matter will be addressed immediately.”

Pence’s office did not immediately respond to CNN’s request for comment.

QAnon is a pro-President Donald Trump deep-state conspiracy theory that incorporates everything from “Pizzagate” to “false flag” mass shootings to the assassination of President John F. Kennedy. It has claimed, for example, that Trump is not under investigation by special counsel Robert Mueller but is instead working with him to go after leading Democrats and other political figures, whom proponents of the theory allege are involved in pedophilia rings. It has been…