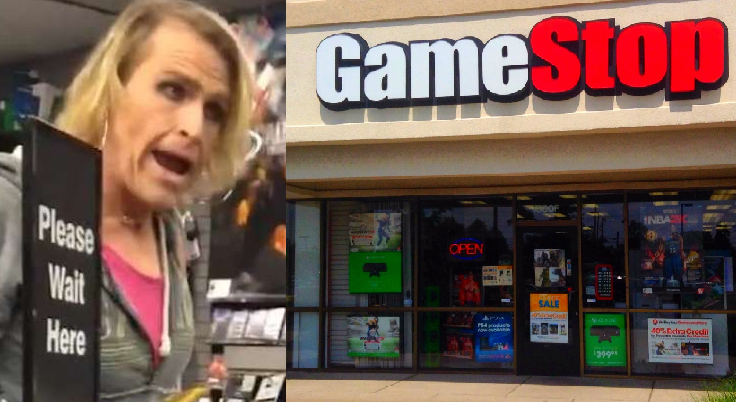 Update: Well folks Super MA’AM has issued a response… apparently she would do it again. I dont know about that rapping career though…

You know the sane or logical thing to do after someone accidentally refers to you as sir or m’am is to freak the hell out, right? We just wanted to be sure. One game stop customer did just that after a game stop employee referred to them as sir. Upon being called sir again the upstanding citizen then threatened to fight the employee outside.

Whats worse is children were present for this insane behavior and when a woman tried to get the individual to call down and tone down their language she also became victims of the enraged customers tirade.

Breitbart writes A biological male living as a transgender female shopping at a GameStop in Albuquerque, New Mexico, lashed out at a male store clerk after he called the customer “sir,” according to a video of the incident.
The dispute began after the store clerk called the shopper “sir” while in the middle of ringing up an item. The transgender customer, however, berated the clerk for using the wrong pronoun while the male clerk apologized profusely.

“I don’t want credit, you’re going to give me my f***ing money back,” the transgender customer yelled at the store clerk, according to the video.

A female customer waiting in line tried to intervene as the situation escalated, saying she would “call the police” if the confrontation did not resolve itself.

“Excuse me sir, there is a young man in here, you need to watch your mouth,” the female customer said. “I can call the police if you would like me to, you need to settle down.”

The transgender customer did not take kindly to the woman’s response, angrily insisting on being called “ma’am.”

“Excuse me, it’s ma’am! It is ma’am!” the transgender customer replied. “You need to settle down and mind…

We may not be experts on how to act in public but berating and threatening someone for a simple mistake is not what a sane logical person would do.