In theory, states should be able to decide if they’re going to deal with unconstitutional regulations from the federal government or not. States are supposed to maintain some degree of sovereignty. 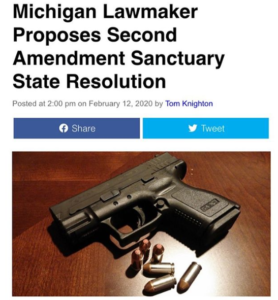 They include House Resolution 219 which would declare Michigan a sanctuary state and “fully affirm its support of the rights ensured and protected by the constitutions of the United States and Michigan, including the rights of law-abiding citizens to keep and bear arms.” The sanctuary state resolution was introduced Jan. 21 and wasn’t on the Tuesday House Judiciary Committee agenda, but Eisen referred to it anyway. The measure was instead referred to the House Committee on Government Operations.

The resolution expresses concern about legislation in the Michigan Legislature and Congress that supporters say would infringe on gun rights. It urges federal and state agencies to preserve the right to bear arms.