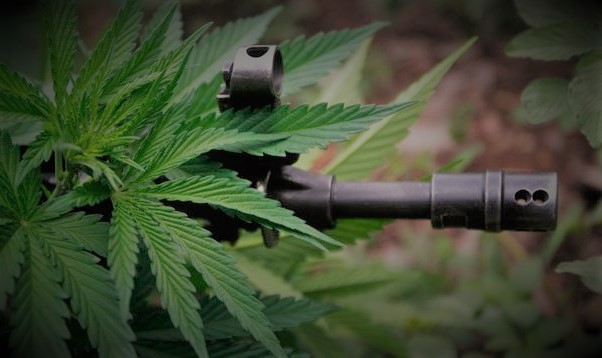 Many states are legalizing marijuana for medicinal and recreational purposes. Colorado, Nevada, MISSOURI, to name a few. What does that mean for gun owners and those holding a concealed carry permit who wish to partake? Though it may be legal in your state under federal law YOU CANT HAVE BOTH. You will have to choose. This comes after a court ruling that the ban is not a violation of the Marijuana users second amendment rights.

Marijuana card holders in colorado, well more specifically FFLs were presented with an open letter from the ATF reminding them of this fact. Which can be seen below: According to kmbc9  A firearms expert said Missourians who get a medical marijuana card will not be able to buy a gun.

“If you are able to get it, get a doctor’s prescription, you will no longer be able to purchase firearms, not legally, not through a gun shop,” firearms instructor Don Pind said.

The federal form required with each gun purchase specifically says that using or possessing marijuana is illegal under federal law, regardless if it is OK for medicinal or recreational use in any state.

Pind said he has seen it happen to Missourians who bought pot in Colorado, where it is legal.

“They came back to Missouri, went to purchase a gun. You have to have a photo ID. When we run your name through the computer, it automatically connects you with buying marijuana in Colorado,” Pind said.

Additionally the 9th District Circuit Court of Appeals Ruled 3 to 0 that a ban preventing Medical Marijuana card holders from buying a firearm is not a violation of the second amendment. The case originated in nevada after a lawsuit was filed by S. Rowan Wilson after she tried to buy a gun for self defense but was denied. The decision was based on the federal ban which can be seen in the ATFs open letter.