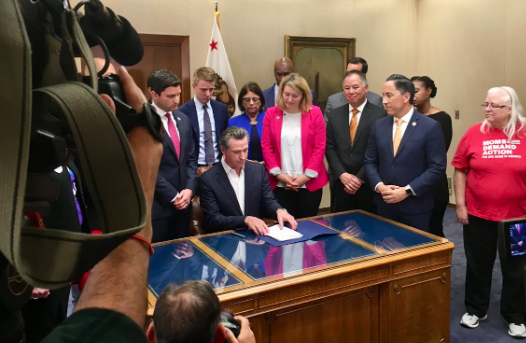 You know its bad when the ACLU is getting involved. The fight for 2nd amendment rights in California just took a massive blow. The Gov. Who apparently seems perfectly ok with the state turning into a 3rd world nation appears to be focusing his attention elsewhere instead of cleaning the shit off the streets and tackling Californias homeless and drug crisis.

One of the bills, which expands a so-called “red flag” law to allow co-workers, employers and educators to seek gun violence restraining orders against firearms owners they fear are a danger to themselves and others, was vetoed twice by Newsom’s predecessor, Jerry Brown.

Newsom also signed a companion bill allowing the gun violence restraining orders to last one and five years, although the gun owners could petition to end those restrictions earlier. The bill also allows judges to issue search warrants at the same time as they grant the orders. The warrants can be used immediately if the gun owners are served with the relinquishment orders but fail to turn over the firearms or ammunition.

“California has outperformed the rest of the nation, because of our gun safety laws, in reducing the gun murder rate substantially compared to the national reduction,” Newsom said as he signed the measures surrounded by state lawmakers. “No state does it as well or comprehensively as the state of California, and we still have a long way to go.”

Between 1993 and 2017, the latest available, there was a 62 percent decline in the gun murder rate in California, nearly double the 34 percent nationally, Newsom said.

Co-workers who want to request a gun violence restraining order will have to have “substantial and regular interactions” with gun owners, and co-workers and school employees will need…

After 2 tries, CA is expanding its #RedFlagLaw! The Gov signed my bill, #AB61, allowing educators, employers & co-workers to file a Gun Violence Restraining Order to temporarily take away someone’s firearms if they pose a danger. Police & family can already do so. #GVRO pic.twitter.com/W7dFemC97r