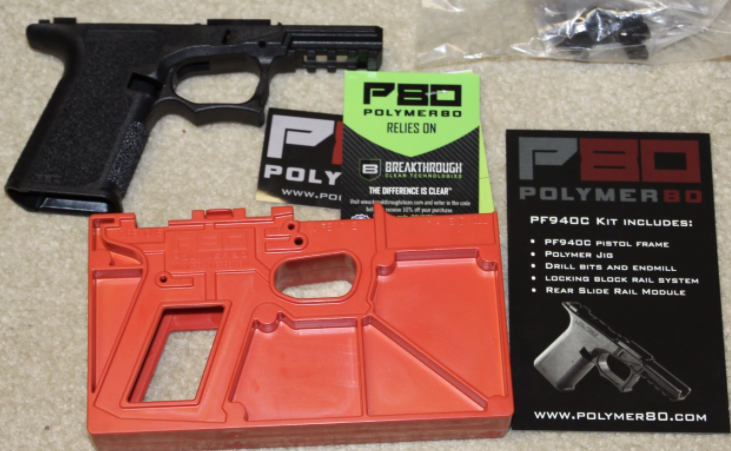 According to Ammo Land

Federal authorities have raided the offices of Polymer80 for allegedly illegally manufacturing and distributing firearms, failing to pay taxes, shipping firearms across state lines, and failing to conduct background checks.

The target of the raid centers around the company’s “Buy Build Shoot Kit,” which includes a slide, barrel, parts, the jigs, drill bits, and an 80% frame. The end-user would still need to mill out the frame to turn it into a working firearm. The ATF claims that because of the way the company sells the kits that these packages constitute firearms, and Polymer80 needs to serialize the frame.

This demand is a departure from long-standing ATF regulations that held as long as the frame was no more than 80% complete that the agency would not consider it a firearm, and it would not need a serial number.

Organizations like Brady United and anti-gun politicians have been pushing the ATF to change the ruling on what constitutes a firearm. States like California have sued the federal government over what it calls “ghost guns” and seeks to redefine a completed gun’s long-standing definition.

Just last week, Brady United filed a wrongful death lawsuit against Ghost Gunner Inc. and 12 other parts makers on behalf of a California family. In this case, the anti-gun organization claims companies like Polymer80 (not named in the lawsuit) markets to prohibited people. Brady United ignores the strong tradition of Americans building their own firearms. Tens of Thousands of hobbyists build homemade guns to continue the tradition.

Anti-gun groups and politicians have pointed to isolated incidents where criminals used finished guns in crimes. In most cases, the suspects were not prohibited people and could have purchased a traditional firearm. Over 90% of guns used in crimes were obtained illegally.

In the weeks after the election, the acting head of the ATF, Regina Lombardo, told the Biden transition team that pistol braces and 80% receivers were the ATF’s number one and number two issues. The raid could signify a shift in ATF’s policies with the incoming anti-gun Biden regime if election challenges are unsuccessful. An owner of a large company that produces 80% lower receivers told AmmoLand News that their lawyers believe that after the election, the Department of Justice will choose not to defend itself in the California lawsuit, effectively changing the laws surrounding 80% lower receivers and frames.

It is unclear what this means for people that purchased the kits from Polymer80. The ATF has yet to indicate if they believe those buyers own illegal firearms. Right now, the case is just involving the “Buy Build Shoot Kit” line of products because it comes with everything needed to complete the gun. Polymer80 does have a determination letter that their frame is NOT a firearm. It is unclear whether the ATF would consider one of their 80% frames a gun if the customer added everything they needed to complete it to their cart separately.

At this point, there is a lot of questions without answers, but gun rights advocates believe this is just a sign of things to come under a Democrat lead Biden/Harris administration.