We NEVER thought it was gonna get here with all the Gundie bullshit but DANGER CLOSE MEDIA GROUP (DCMG) has done it again and gone out to get the real TOP 40 list we have all been waiting for. SO check it out, did your favorite influincer make the list? 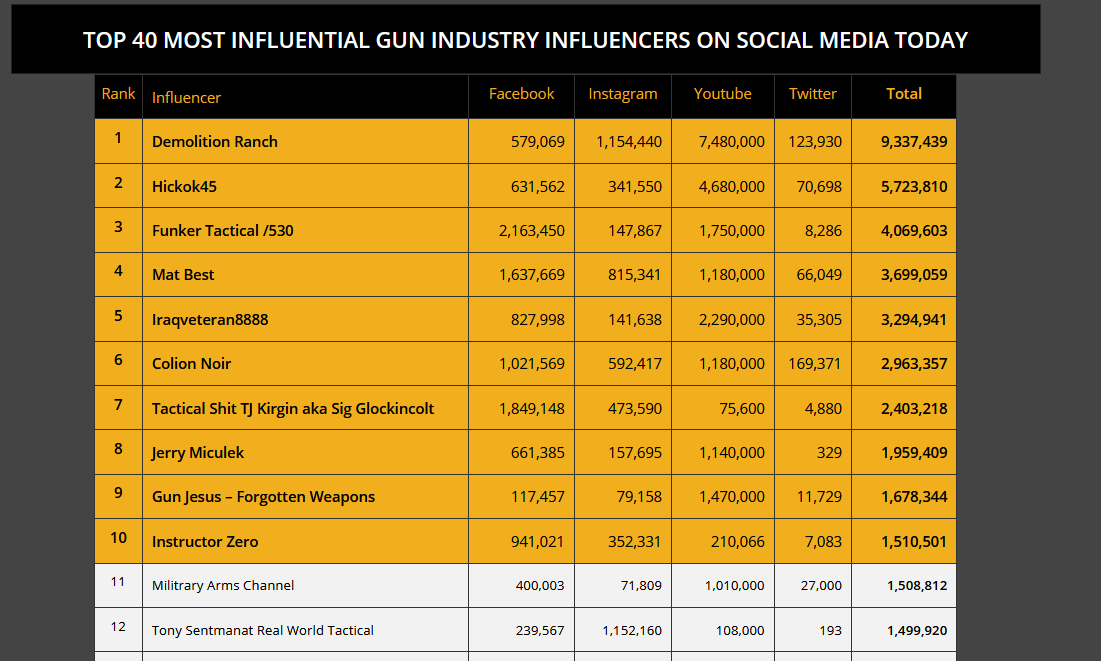 Influencer Marketing is essentially social media celebrity endorsement and product placement. In the past, companies paid radio disc jockeys to do LIVE endorsement commercials about a product they use or believe in, or they paid production companies to include product placement in TV Shows and Movies. Today that strategy works better than ever with some social media celebs having over a million fans or followers. Now you have to take into account the algorithm reducing their post reach to somewhere between 3% to 7% of their fan base when you estimate value at a Cost Per Thousand (CPM) reached. But just like a radio stations, the goal is to have frequency of message. A single radio commercial does not reach the whole radio station audience. Likewise, a single TV Commercial never reaches the whole TV station audience, not even the Super Bowl.. Much the same way, businesses are contracting with Influencers to build and maintain ongoing campaigns that over time will reach all or most of the influencers audience with the key being frequency of message and branding.

Gun Industry Influencer Marketing includes reposting (sharing) branded content, using the product in pictures, stories and videos (product placement) and creating content around the product (branded content). Rates vary based on popularity, reach and demand but from what we hear, one of the guys listed below gets over 30k per video. HOWEVER, it should be noted that NOT ALL influencers on this list are paid by companies to advertise their gear. Some of the influencers on this list have chosen to be supported by their fans instead of being paid by companies for reviews of their products.

We have used our huge social media network to pole gun owners and asked them to nominate the Gun Industry Influencers the TRUST Most. Trust is a major factor. A large following is nothing if the fans do not trust what the influencer says. We then sorted the influencers by total fan base on Facebook, Instagram, Youtube and Twitter. Nominees were then filtered by the following criteria;

This list is NOT based on reach since we do not have access to all the gun industry influencer analytics and reach can vary wildly based on virility of content created. This list and it’s variations are based on total follower, fans, subscribers at the time of the data collection (January 2020). It should be noted that if an influencer had multiple channels (ie two Instagram pages) those fan bases were added to achieve a total count.

We recognize that when dealing with a list this large, there most definitely will be discrepancies. If you represent one of these influencers and would like to correct data shown below we will entertain those adjustments until the last day of Shot Show 2020 at which time the numbers will become official until 2021. If the adjustment affects the top 10 we will still recognize the influencers below you and nobody will be “pushed out” of the top ranking

SEE ALL THE influincers and how they all stack up over on the DCMG site!