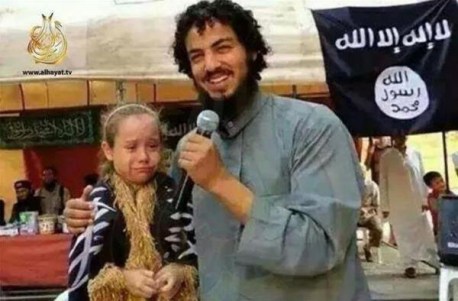 Evidently it is not entirely true, the story that is, but he IS dead and he WAS ISIS so F*ck Yeah!.

“A kafir has no human value in Islam. They can be exploited for their skills, for sex, for slavery, for anything – or just be killed off. Muslims believe they have great rewards in heaven for killing kafirs.

The photo was published on twitter by a Muslim user (@Fadel_alHadidi) and profess to be an ISIS militant marrying a 7-year old kafir in occupied minority district of either Mosul or Syria (source and image is unconfirmed). The child is standing with the ISIS terrorist flag for jihad wrapped around her shoulders. During a forced conversion the victim is made to recite the Quran to make any  pedo-marriage halal according to Sharia law.

Imagine if you were in the shoes of this poor little girl! Who can protect her? There is no one to protect her. On the contrary Qatar and Saudi Arabia has been feeding this beast for ages. Turkey and Kuwait has joined in Caliphate support while mosques all across the West collect donations for this monster to grow and expand.

Obama, UK and EU being their ally, is funding the spread of terror to corner small children like her to become rape victims to terrorists who have no age limit to their Islamic pedophilia. Your tax monies are being used for this evil.” READ MORE

And now for the good news. The Iraqi Army has managed to find and kill this piece of shit and have pictures to prove it. It has just come to our attention that this bastard DID NOT marry the little girl (that’s GOOD NEWS), but he IS a member of ISIS and he IS dead. (MORE GOOD NEWS.) Below is the video of what ACTUALLY happened when the featured image of this article was taken.