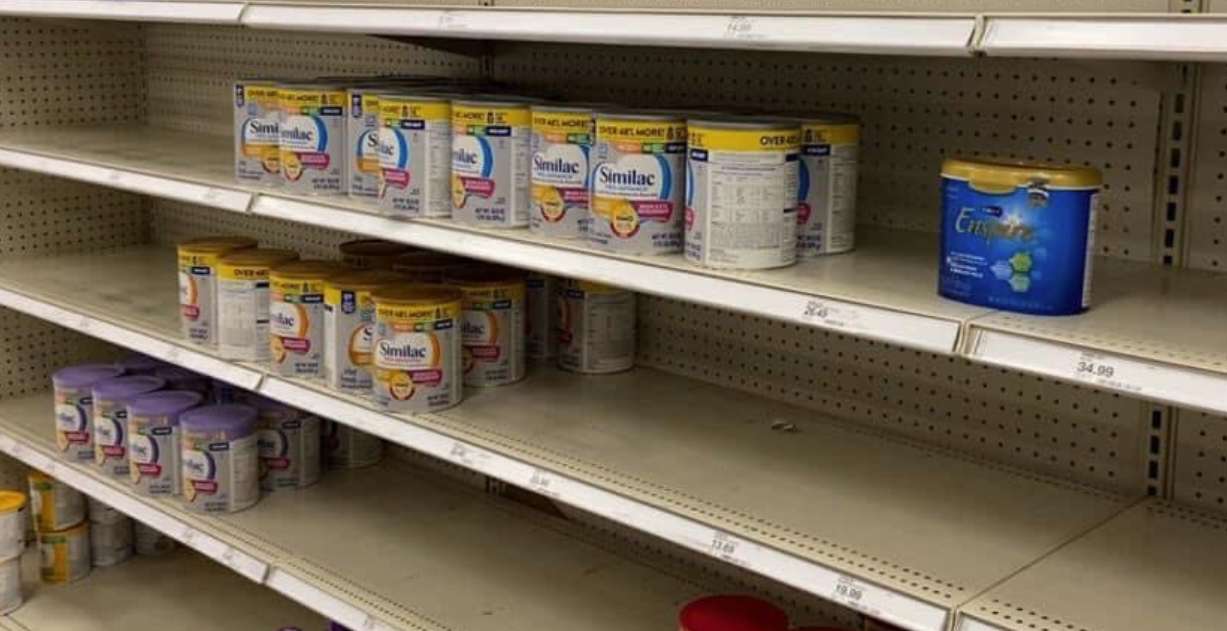 Pallets of baby formula are being sent to holding facilities at the border amid a shortage that has seen many parents unable to find it at their local stores, according to a GOP representative.

“They are sending pallets, pallets of baby formula to the border,” Rep. Kat Cammack, R-Fla., said in a video posted to Facebook Wednesday. “Meanwhile, in our own district at home, we cannot find baby formula.”

Cammack posted pictures to social media of empty formula shelves in Florida next to the pallets of food being sent to the border, saying in the video that a concerned border patrol agent sent her the image.

The first photo is from this morning at the Ursula Processing Center at the U.S. border. Shelves and pallets packed with baby formula.

The second is from a shelf right here at home. Formula is scarce.

She said the picture comes from “Ursula processing facility” in Texas, where thousands are being housed and processed and then released.” The Florida lawmaker said the concerned agent told her that she “‘would not believe the shipment I just brought in.’”

“He has been a border patrol agent for 30 years and he has never seen anything quite like this. He is a grandfather and he is saying that his own children can’t get baby formula,” she added.

U.S. Customs and Border Protection did not immediately respond to a Fox News request to confirm the authenticity of the image.

The story comes as more than 100 House Republicans called on the Biden administration to do more to address the ongoing shortage that has sent worried parents scurrying from store to store in hopes of find formula.

“This issue is a matter of life and death, and it is time this administration treats it with the appropriate urgency it deserves,” the GOP lawmakers said in a letter to Biden Wednesday.

Supply chain disruptions were exacerbated when Abbott, one of the country’s largest formula manufacturers,  was subject to a large safety recall. According to an analysis by Datasembly, who tracks product data for retailers, the out-of-stock percentage for baby formula currently sits at 43%, up from 30% at the beginning of April.

“This issue has been compounded by supply chain challenges, product recalls and historic inflation,” CEO of Datasembly Ben Reich said in a statement to Fox News Digital. “The category started to see stocking challenges beginning in July 2021, and the situation has continued to worsen into 2022.”

The White House has said alleviating the formula shortage is a “top priority” for President Biden. “That’s something certainly we’ve been tracking. Ensuring that infant formula is safe and available for families across the country is a top priority to the White House,” Incoming White House press secretary Karine Jean-Pierre said Wednesday.

Cammack made clear that she does not blame the children at the border for the issue, but said it is “infuriating to me is that this is another example of the America last agenda that the Biden administration continues to perpetuate.”

“I don’t know about you, but if I am a mother, anywhere anytime in America, and I go to my local Walmart or Target or Publix or Safeway or Kroger or wherever it may be that you shop and you are seeing their shelves and you are seeing signs that you are not able to get baby formula,” she said. “And then you see the American government sending by the pallet thousands and thousands of containers of baby formula to the border, that would make my blood boil.”