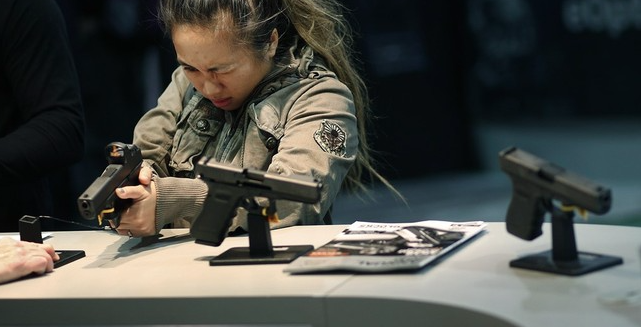 However, schools routinely ignored that right whenever it was convenient. Take the zero-tolerance policy many schools implemented towards firearms. They routinely used those policies to discipline students who wore clothing that depicted a firearm in any capacity. That includes pro-Second Amendment messages.

Now, a federal court has told those schools to knock it off.

The Supreme Court has long protected student speech on public school grounds as long as it doesn’t “materially and substantially interfere” with the school’s operation.

Officials in two Wisconsin school districts came up with a novel way around the Tinker precedent: redefine what counts as “speech.”

A federal judge swatted down this move in a consolidated case brought by students whose gun-themed clothing was banned on school grounds. Officials claimed the clothing “fail[ed] to convey a particularized message,” so it wasn’t constitutionally protected.

“Not only did Plaintiffs intend to convey a clear message in wearing their shirts, it also seems clear that school authorities understood the message Plaintiffs were intending to convey, at least to the extent their message included an appreciation for the right to own firearms,” U.S. District Judge William Griesbach wrote in a short ruling earlier this month.

The two schools may yet be able to prove they were “justified in prohibiting Plaintiffs from conveying their messages in the manner and place chosen by them,” he concluded. But they are wrong that “the shirts lack constitutional protection” as a threshold matter.

Asked if the school officials’ argument was common, a First Amendment expert told The College Fix they should have known better.

“Restrictions of clothing based on the message that the clothing contains (as opposed to content-neutral dress codes) are treated as speech restrictions in K-12 schools, and are presumptively unconstitutional,” UCLA Law Prof. Eugene Volokh wrote in an email.

The problem, however, is that schools have decided that certain speech is better than others. They’ll allow students to stage a walkout, but not wear particular shirts.

After all, when the judge said the schools may be about to prove they were justified, that’s because there’s a case that can be made about free speech not justifying disruptions to the school. A school-wide walkout is a disruption. A t-shirt? Not so much.

What this was really about was that the schools simply didn’t approve of the message, so they sought to stamp it out. They opted to punish anyone who strayed from the anti-gun orthodoxy.

And, because of that, they just got slapped down. Hard.

Frankly, they should have.

However, it just goes to show you that those who would attack your Second Amendment rights are also the kind of folks who will work to quash your other rights as well. Just like some members of Joe Biden’s transition team, those who would ignore your constitutionally-protected right to keep and bear arms have already demonstrated their utter disregard for any right, but the First Amendment seems a standard next target.

Luckily, the courts ruled right on this one.