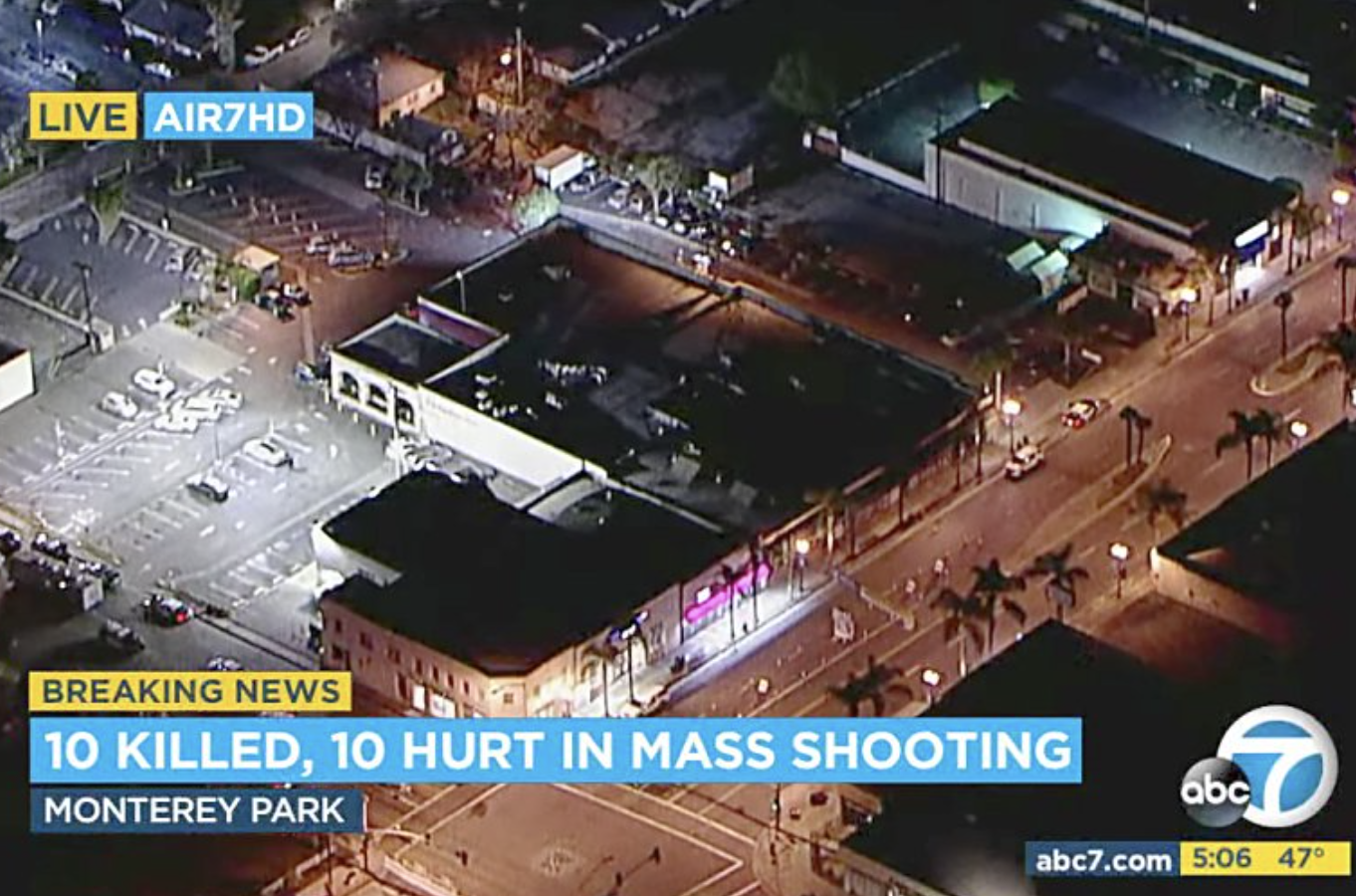 A man killed ten people and injured many more at a ballroom dance club where people were celebrating the Lunar New Year. Because of California’s strict gun control laws, no good guys were able to fight back. Police tracked him down in a vehicle hours later, and the 72-year-old Asian suspect committed suicide as police approached.

Of course, up until that point, the mainstream media had been fixated on the tool he used rather than the killer or his description. We all got plenty of gun descriptions, but no mention of the shooter other than the fact that he was male.

#Breaking #MontereyPark According to scanner reports 10 people have been fatally shot, 9 others injured during a #MassShooting at a business on Garvey Ave. The suspect is still on the loose according to PD on scene. #News #Developing #Shooting #LunarNewYear pic.twitter.com/YDFQ2gTLci

From the Daily Mail:

Local restaurant owner Seung Won Choi told the LA Times three people rushed into his business and told him to lock the door.

Choi said he was told there was a man with a machine-gun and believes there shooting took place at a dance club.

He added the man had multiple rounds of ammunition on him and would reload every time he ran out.

Report: Monterey Park mass shooting occurred at a dance club, one of the victims was the boss of the club, "shooter was carrying a long gun and appeared to fire indiscriminately"https://t.co/KN4YJhpn6B pic.twitter.com/BcPgn2N8rK

Later, police linked the assailant to another attempted shooting at another Alhambra dance hall, not far from the first. Patrons at that location, on the other hand, charged and disarmed the killer before he could hurt any more people.

Cops apprehended him hours later, and the threat ended with a self-inflicted gunshot wound.

As speculated earlier, late on Sunday authorities confirmed that the gunman suspected of killing 10 people late Saturday in Monterey Park, Calif., fatally shot himself Sunday after police officers tried to pull over a vehicle he was driving in the city of Torrance about 30 miles away, authorities said.

As the WSJ reports, LA County Sheriff Robert Luna identified the suspected gunman as 72-year-old Huu Can Tran. Sheriff Luna said investigators were still working to determine a possible motive for the shooting, which also sent 10 people to area hospitals with injuries.

“The suspect responsible for this tragedy is no longer a threat,” the sheriff said in a news conference.

After the mass shooting in Monterey Park, an armed man entered a dance hall in nearby Alhambra, authorities said. Several people wrestled the gun from the man, who then fled in what witnesses said was a white cargo van.

Sheriff Luna said that Torrance officers pulled over a van matching a description of the vehicle Sunday morning, and the driver proceeded to fire a single gunshot as they approached, taking his own life. Police subsequently found evidence inside the vehicle tying him to both locations, as well as a firearm, Sheriff Luna said.

Sheriff Luna said police also recovered what he described as a magazine-fed, semiautomatic assault pistol at the Alhambra scene. He said it had an extended, large-capacity magazine attached to it.

Many people are wondering how this could have happened in Gavin Newsom’s California. After all, the Golden State has nearly every gun control measure known to man on the books, and few, if any, concealed carry licenses are issued in Los Angeles County. Not to mention laws prohibiting the shooting of murderers.

The bottom line is that only a good guy with a gun can stop bad people with evil in their hearts. California’s gun control laws virtually guaranteed that no good guys would be able to defend themselves against 72-year-old lunatics bent on slaughtering innocent people. Without personal defense weapons, those at the dance hall were like fish in a barrel to the killer, and California’s anti-gun political class intends to keep it that way.