Last year, a lawmaker in Arkansas decided his state needed a red flag law. Unsurprisingly, it was defeated.

Red flag laws are controversial because they involve infringing on the rights of an individual who doesn’t get their due process rights respected. As a result, gun rights activists almost universally oppose red flag laws. As well they should. 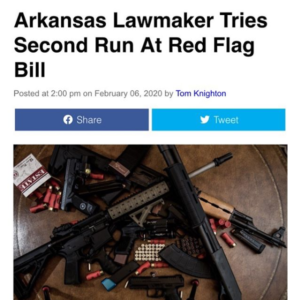 However, it seems the lawmaker in Arkansas didn’t get much out of his failure last year. Instead, he wants to try it all over again.

Senator Greg Leding, the bill’s sponsor, said in an interview that there were enough misconceptions that led to its failure. “There were a lot of questions about how these laws work, they can be very effective but they do need to be put together in a proper way so it can protect individuals and the public and I think it was just a matter of having not had sufficient time to really sit down with lawmakers and address all of their concerns.” While he began working on the proposal a year prior to the 2019 legislative session, it still wasn’t enough time to convince his Republican counterparts who believe red flag laws violate peoples’ rights.