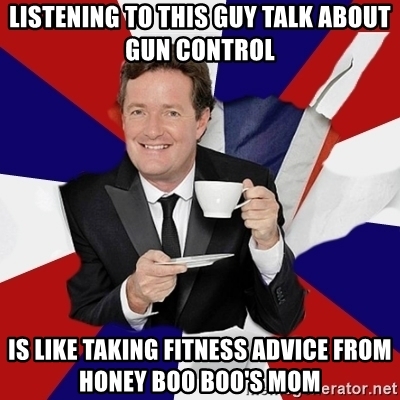 Remember the last time the Brits demanded we hand over our guns? Yeah. That is the exact reason we are not giving up a single solitary firearm. Not one. That and if it Weren’t for us Americans and to quote Mr. Morgan “Massive GUNS” in WWII he would be speaking German right now. What Piers and other Foreigners fail to realize is the 2nd amendment was written so that Americans of every race, religion, and creed can protect themselves from tyranny. Piers made this post to twitter following the synagogue shooting.

Dear America,
I know this is a crazy idea from an ignorant foreigner – but why don’t you just TRY giving up some of your guns, to see what happens?
Start with the AR-15, which is now used in almost every mass shooting. Make it more difficult, not easier, for lunatics to murder. pic.twitter.com/m49n7s8f2U

Breitbart brings up a very good point when the shooter chose his target he chose to use his guns criminally he struck a target devoid of good guys with guns who were prepared to stop an attacker. In other words, he struck a target where no one would shoot back. Another gun free zone.

Morgan’s tweet overlooks many facts, the first of which is the synagogue attacker was armed with numerous handguns. And this makes sense when one considers the Rockefeller Institute of Government’s study showing that mass public attackers choose handguns over any kind of rifle by a margin of three to one.

Also note Morgan’s gun control push; his calls for making it “more difficult, not easier, for lunatics to murder.” The synagogue attacker complied with the left’s gun controls in acquiring his firearms, which he “legally” owned. Moreover, he complied with gun control to acquire a license to carry a gun.

This just highlights that gun-free zones are slaughter houses and gun control DOES NOT WORK! Criminals will always find a way to arm themselves whether its buying a stolen gun off the street or making one themselves and when they are armed they are going to pick a soft target where people are least likely to fight back.

Morgan’s solution to this problem is for law-abiding gun owners to give up their firearms is just idiotic and absurd. Responsible gun owners are not the ones killing people.

So the Pittsburgh shooter owned 10 guns, all purchased legally.
Despite spewing vile anti-Semitic hate online, he was allowed to carry on arming himself until he committed mass murder.
America – this is NUTS.
Why do you make it so easy for dangerous lunatics to do this?

The fact is it is so easy for these psychopaths to kill so many is because for one, authority figures whether it be law enforcement, teachers and school faculty, or doctors have ignored the warning signs on numerous occasions. Look at parkland. At least 45 calls were made to the broward country sheriffs office in reference to Cruz. Multiple people wanted him committed. The Pulse night club shooter had been the subject of a 10 month FBI investigation. Esteban Santiago walked into a FBI office with a loaded magazine two months before the shooting at fort Lauder dale airport and said he had been having, “Terroristic thoughts”. Oh and lets not forget that one time when the Air Force forgot to notify NICS. This simple act would have prevented The San Antonio church shooter from buying his firearm. Additionally, when citizens who otherwise would be able to protect themselves are disarmed before they can enter these gun free/killing zones are stripped of their right to self defense the second they enter a gun free zone whether it be a college campus, post office, shopping mall, etc.

If for any reason you need clarification on what we are trying to get at in this article. Please see the attached meme below. Also Coffee is amazing and Tea belongs in the Harbor.