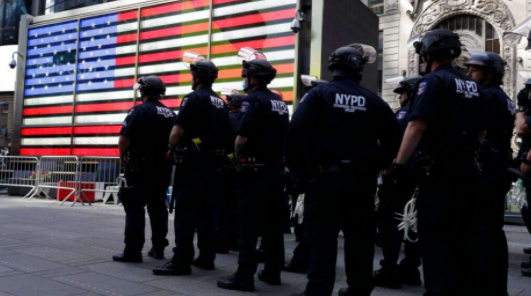 The New York Police Department – said to be the largest police force in the nation – is in the grip of a “troubling” shakeup, as retirements and resignations continue to mount, officials said.

Union officials and others say the exodus is being fueled in part by pressure by racial justice advocates to defund police departments or impose major reforms.

The NYPD said in an email to Fox News this week that 2,385 officers have submitted their retirement papers this year as of Oct. 6 – an 87% increase from the 1,274 retirements reported during the same period in 2019.

The department said 372 others have resigned as of Oct. 6, five more than last year.

“The NYPD has seen a surge in the number of officers filing for retirement,” a spokesperson said in an email to Fox News this week. “While the decision to retire is a personal one and can be attributed to a range of factors, it is a troubling trend that we are closely monitoring.”

As of this week, the department’s headcount stood at just under 34,500, according to an NYPD spokesperson.

One of the most prominent losses was Chief of Patrol Fausto Pichardo, who oversees the “largest and most visible” unit within the NYPD — the Patrol Services Bureau. Pichardo, the NYPD’s first Dominican chief of patrol, filed for retirement Tuesday after more than two decades on the job. He has held the position since Dec. 5, 2019.

Police Commissioner Dermot Shea lauded Pichardo, 43, for his service at the helm of the Patrol Services Bureau, telling local affiliate FOX 5 that the department is also losing “a friend and a member of our blue family.”

Fausto Pichardo, more than the @NYPDChiefPatrol, a friend & member of our NYPD family. A consummate professional & the ”total package,” we wish him the best of luck in his retirement. His departure is a huge loss.

“Fausto, when I tabbed him last year to be the chief of patrol, I never hesitated for a second, and I never regretted the decision for a second,” Shea said, calling him a “consummate professional.”

“Probably one of the most well-rounded individuals that we have. The total package. [A] huge loss and I wish him the best of luck.”

Shea previously told PIX 11 that “putting it mildly … I was surprised that he’s leaving.”

But sources first told the New York Post and later confirmed to Fox News, that Pichardo’s decision to retire was spurred in part by de Blasio’s micromanaging.

“I think he knew better to call Shea and beat him up, so … he called Pichardo instead, and he had enough,” a law enforcement source told Fox News. “I believe that it was a steady drumbeat” that got “louder and louder,” until “it ultimately led to” his retirement, the source said.

Other sources told the Post that de Blasio, a Democrat, berated Pichardo for missing a phone call following an hours-long shift responding to recent unrest in Brooklyn, where crowds including Orthodox Jews protested against state coronavirus restrictions.

De Blasio “routinely loses his s–t about missed phone calls,” a source told the Post, which provided multiple examples of the mayor’s controlling behavior toward Pichardo.

“This is nothing but inappropriate meddling from a person who doesn’t know anything about patrol — even though he has been here for seven years,” the source added.

Pichardo is expected to step down within the next 30 days.

Lynch said public safety was “suffering” as top talent from all ranks in the department was “being driven out the door.”

In a statement to Fox News on Friday, Lynch said the NYPD “has never seen so much talent and experience walking off the job as we have these past few months.”

“This is the highest attrition rate we have seen in over a decade, during a time we are battling enormous spikes in shootings and murders,” Lynch wrote. “And thanks to the City Council and Mayor’s ‘Defund the Police’ lunacy, no help is coming any time soon. Our elected leaders need to be held responsible for the dangerous path they’ve chosen.”

Asked about the media reports surrounding Pichardo’s decision, de Blasio fired back that it was “a personal decision based on personal and family factors.”