Fox News says: A police union says the men and women of New York City’s finest are now “declaring war” on Mayor Bill de Blasio following a pair of shootings targeting officers in the Bronx over the weekend.

The fiery rhetoric directed at the Big Apple’s Democrat leader — who has implemented several measures critics say are hostile to police – comes as the NYPD filed charges against suspect Robert Williams in both attacks.

“Mayor De Blasio, the members of the NYPD are declaring war on you!” the Sergeants Benevolent Association wrote in a tweet. “We do not respect you, DO NOT visit us in hospitals. You sold the NYPD to the vile creatures, the 1% who hate cops but vote for you.

“NYPD cops have been assassinated because of you,” the tweet added. “This isn’t over, Game on!” 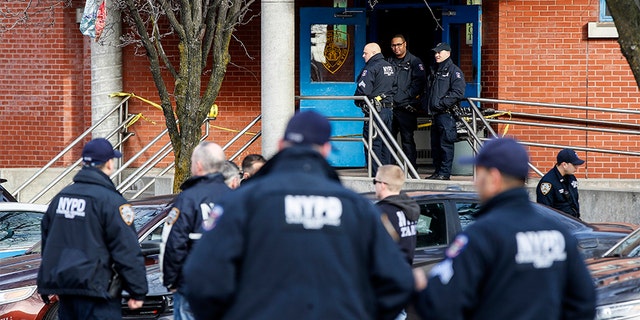 New York City police officers work the scene of a police-involved shooting outside the 41st precinct on Sunday. (AP)

Police say Williams first ambushed two officers from the 41st Precinct on Saturday night, who had been sitting in a marked patrol van. One officer was wounded as a result of that attack when a bullet grazed his chin and neck.

Williams then walked into the precinct’s station house the next morning and opened fire with a 9mm handgun, injuring a lieutenant, police added. Only after running out of bullets did the 45-year-old Bronx native lay down on the ground and surrender.

The two officers wounded in the attacks have been treated and released from New York City hospitals.