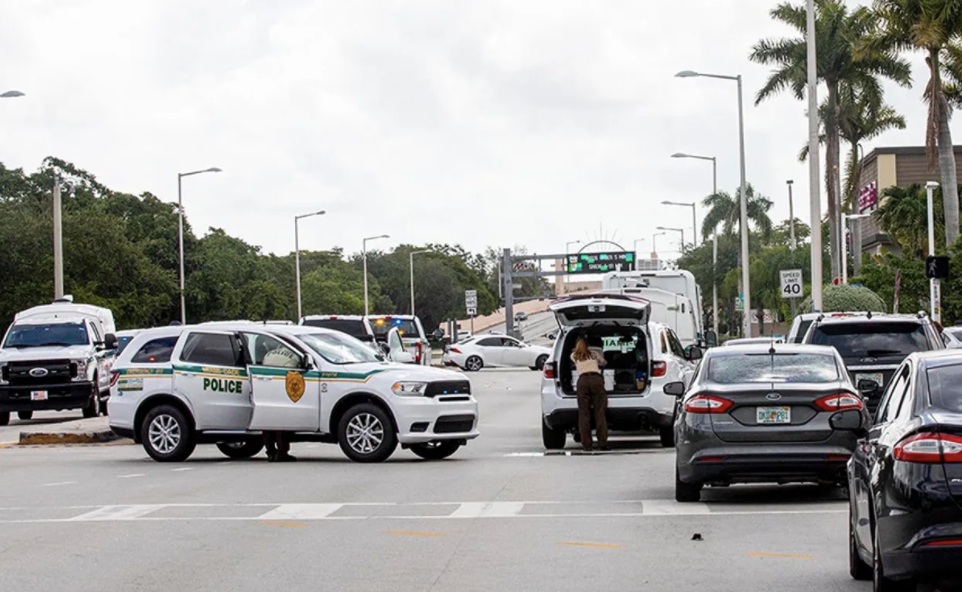 Two more shootings rocked the Miami-Dade area within about a 24-hour period, including gunfire striking a corrections officer and others who were leaving a graduation party, and then a murder-suicide early the next morning across town that happened at an apartment complex near an air base.

The latest incident happened early Monday when Miami-Dade police responded to a call about shots fired at an apartment complex near the Homestead Air Reserve Base. A 38-year-old woman and a 15-year-old boy were fatally shot, and three other young people were wounded by the woman’s boyfriend. The 42-year-old man later killed himself outside the apartment as police officers tried to negotiate with him, police said.

In a separate incident Sunday, three people were killed and five others were wounded when gunfire erupted around 2 a.m. as people were leaving the graduation party hosted at the Hookah Inn, near the intersection of Southwest 104th Street and 109th Court, WPLG reported.

“Our community was again painfully struck by gun violence overnight,” Alfredo “Freddy” Ramirez III, director of the Miami-Dade Police Department, tweeted. “No one is immune, this shooting took the life of a correctional officer. We all have the responsibility to report these killers. My deepest condolences to those affected by this intentional act of violence.”

Our community was again painfully struck by gun violence overnight. No one is immune, this shooting took the life of a correctional officer. We all have the responsibility to report these killers. My deepest condolences to those affected by this intentional act of violence.

Authorities said one or more vehicles pulled into the parking lot at the strip mall and someone inside one of the vehicles opened fire.

The Florida Department of Corrections identified one victim killed as corrections officer Tyleisha Taylor. She died after being transported to Jackson South Medical Center. She had worked at Dade Correctional Institution since January 2020.

“We are devastated to learn a member of our FDC family, Officer Taylor, was killed in a fatal shooting. Our prayers are with her family as they navigate this unimaginable loss,” Florida Secretary of Corrections Mark Inch said in a statement.

The two others killed were found dead in a vehicle that crashed into a wall at Miami-Dade College’s Kendall Campus while fleeing the shooting, Miami-Dade Police public information officer Angel Rodriguez confirmed to Fox News. It’s unclear how the two men died. Investigators believe the two men were somehow involved in the shooting, but Rodriguez said it is too early to call them suspects. A firearm was found inside the vehicle, he said.

“Every weekend, it’s the same thing. We have to band together,” Ramirez added at a press conference. “There’s a lot of work to do. We have to come together as a community and make this stop.”

“We will not allow a small group of violent actors to terrorize our community, and violent offenders will face the full weight of the law,” she said in a statement Sunday. “I’m fully committed to making sure Miami-Dade Police Department has all the resources they need to end this cycle of gun violence and prevent more tragedy by getting violent criminals off the street.”

The incident comes exactly one week after a mass shooting at a Miami-Dade banquet hall on May 30 left three people dead and more than 20 people wounded. Hours before the third victim’s death was announced Thursday, Miami-Dade Police and elected officials held a press conference launching a new crime-fighting operation to combat gun violence.

Their 12-week initiative, dubbed “Operation Summer Heat,” will consist of more police patrols in cities throughout the county along with overtime and greater efforts to monitor social media and the sharing of intelligence across law enforcement agencies.

The announcement came days after three suspects were seen on surveillance footage waiting in a stolen SUV for about an hour before unleashing gunfire on a crowd waiting outside the El Mula Banquet Hall in Hialeah to get into a local rap artist’s album release party. The three gunmen then were seen fleeing in the same SUV, which was later found abandoned and submerged in a canal.

The victims who died were identified as Desmond Owens and Clayton Dillard, both 26. The third victim to later succumb to her injuries was later identified as 32-year-old Shankquia Peterson, WSVN-TV reported.

No arrests have been made in either the banquet hall or graduation party shooting.

Anyone with information is asked to call Miami-Dade Crime Stoppers at 305-471-TIPS.

Another shooting on May 28 in the Wynwood area killed one person and injured six others.