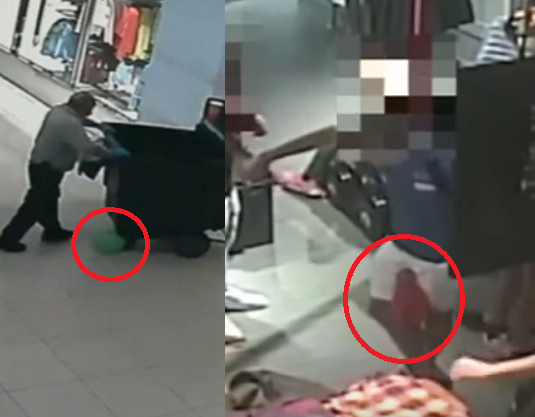 Really? Balloons? This is where we are now? Apparently the media has driven the mass shooting agenda so hard that any popping noise now will send people into a panic. Balloons, books falling on a tile floor, I wouldn’t be surprised if bubble wrap would trigger a stampede these days no thanks to the medias fear mongering.

And there in lies the problem.

WSVN reports that a new video has been released that shows the source of a major scare at the Town Center Mall in Boca Raton.

A janitor could be seen rolling over and popping a balloon with his cart and some children popping another balloon, Sunday.

Shoppers, who believed that someone had opened fire, ran for cover and called 911 in a panic.

“There’s an active shooter at the Boca mall,” one caller said.

“We just heard gunshots go off,” another caller said.

Police officers and a SWAT team swarmed the shopping center.

“Everyone is running from the food court,” a third caller said. “Everyone ran into my store. We locked the doors. We’re on lockdown.”

The mall was placed on lockdown for hours, and some shoppers hid in stores until…

So what are  your odds of being a victim or a mass shooting?

Well according to the Business Insider your chances are 1 in 11,125. You are MORE LIKELY to kill yourself. Thats right, the chances of suicide is 1 in 92. Even so the chances of being killed by heart disease is 1 in 6 yet we don’t see anyone hiding from a cheeseburger. The chances of dying in a motor vehicle accident are 1 in 108 yet no one is calling for the ban of assault cars… can you see where we are going with this?

We are not saying you should throw situational awareness out of the window. But this is what happens when the media beats a dead horse they love to sensationalize stories for ratings and as a result viewers now believe the next time they go out to eat or go to class they are going to be the next victim so they will hop onto the agenda and push for more gun control.