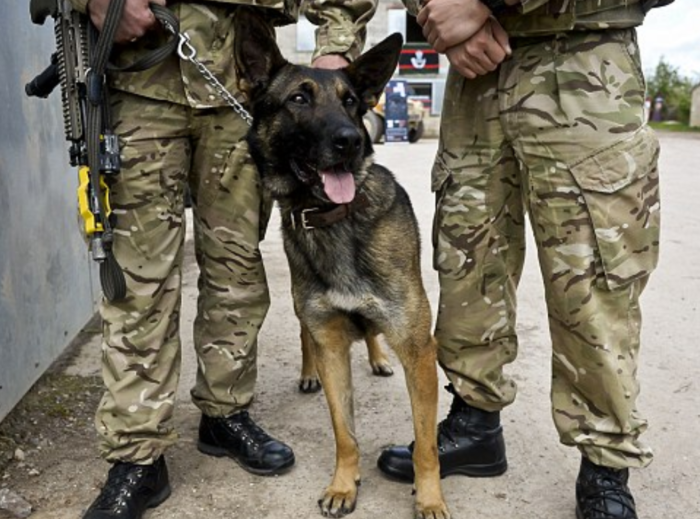 Military working dogs bring a whole new level of badassery to combat. The Belgian Malanois is known for its lack of fear when facing an attacker or intruder which is one of the reasons they are used with law enforcement agencies and military units across the globe. One such canine was deployed with the British SAS in Syria and came to the units aid when they were ambushed. A bite force of 1400 psi has earned them the nickname Maligators amongst many of their human counterparts.

According to the DailyMail An SAS team was saved after a brave military dog fought off a jihadi who attacked a patrol in northern Syria.

The unnamed Belgian Malinois, a fierce breed of sheepdog known for its bravery, had been out on a routine patrol with a team of six crack soldiers from the SAS.

They had just entered a small village in a convoy of armoured vehicles when they got out to continue the recce on foot.

But soon after they left the safety of the convoy, they were attacked on all sides by waiting jihadis in what was described as a ‘360 degree ambush’. The SAS men returned fire but the jihadis began closing in and tried to outflank them.

The animal was said to have leapt to the defence of the struggling British soldiers, tearing the throat of on gunman who was firing at the patrol.

It then turned on two other jihadis, leaving them seriously injured before the other six ambushers all fled…

According to AmericanMilitaryNews When the team entered the building, they saw the dog standing over a dead gunman. His throat had been torn out and he had bled to death. There was also a lump of human flesh in one corner and a series of blood trails leading out of the back of the building. The dog was virtually uninjured. The SAS were able to consolidate their defensive position and eventually break away from the battle without taking any casualties.