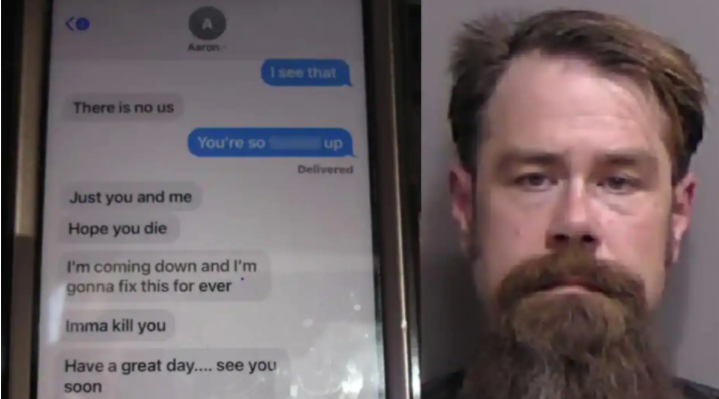 Florida police were able to intervene in an attempted murder at just the right time after a woman called 911 to report that her estranged boyfriend had traveled from Connecticut and was chasing her with a loaded gun, authorities said.

Bodycam footage shows the suspect, 39-year-old Aaron Thayer, being shocked with a Taser stun gun and apprehended as police arrived at the scene on Saturday.

The man’s girlfriend, who was not identified, had called police the day before to report receiving multiple threatening text messages, some of which said “I hope you die” and “Imma kill you,” according to the Flagler County Sheriff’s Office.

The next day, police received a call from the woman saying Thayer was at her home, “armed with a tire iron,” and was trying to break in and threatening to kill her, authorities said.

Flagler County deputies were nearby and immediately responded to the scene, where they encountered the victim fleeing as Thayer was chasing her.

“Deputies protected the victim by having her hide behind their patrol car and confronted Thayer and attempted to take him into custody,” the sheriff’s office said. “However, Thayer was not compliant and was tased.”

Thayer was found with a loaded handgun and a folding knife in his jeans, police said.

“The Easter bunny came early for the victim called Deputy’s Jen Prevatt and Ed Faircloth,” Sheriff Rick Staly said. “This guy told the victim he was going to kill her and less than 24 hours later he had driven all night and was at her door to kill her.”

Thayer was arrested and has been charged with written threats to kill, attempted premeditated murder with a firearm, possession of a firearm/ammunition by a convicted felon, petit theft and resisting arrest without violence, according to police.

Police said the victim reported that Thayer had installed security cameras on the property to “keep tabs” on her while he was away in Connecticut, reportedly for work, and that she pointed out “blind spots” to authorities because Thayer might be watching.

The day before, deputies had the victim answer one of Thayer’s calls while they were talking to her to determine where he was calling from. They “could hear Thayer ask the victim who was at the house with her and then told her he was on his way to kill her,” police said.

The sheriff’s department was able to get a warrant for Thayer’s arrest with nationwide extradition.

Thayer is being held without bail at the Sheriff Perry Hall Detention Facility. It was unclear if he has an attorney who could speak on his behalf.

“I am so thankful that my deputies were able to intercept this guy and used their training, tactics and de-escalation techniques before he was able to hurt anyone,” Staly added. “They handled a very volatile and dangerous situation by running toward danger to protect the victim. This situation that could have had an entirely different outcome with either the victim, suspect or deputies injured or killed if not for the heroic efforts of our deputies.”