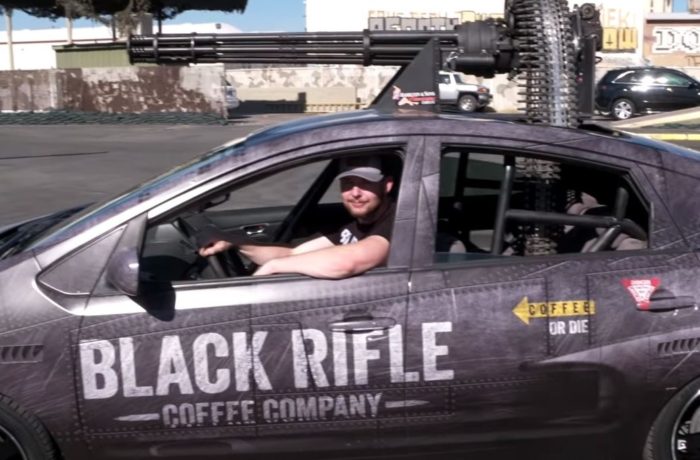 Prius’ are notoriously know for being quite possibly the stupidest hipster vehicle you could probably even own. I have to take 50 consecutive showers in a row just to wash the stigma of having to drive one off me. The guys over at Black Rifle Coffee Company have produced probably the only prius I would want to be in. They attached the fucking cannon used in the F16s to the small econobox! While it may not be the greatest on fuel economy now, other commuters will definitely think twice about cutting you off.

According to Coffee or die Black Rifle Coffee Company’s Richard Ryan, who you may know from the popular YouTube channel FullMag, got the chance to fulfill a dream he’s had for over a decade: mounting an M61 Vulcan cannon to the top of a Toyota Prius.

Everyone knows what a Prius is, but the uninitiated may not be familiar with the beastly, Gatling-style M61 Vulcan. The Federation of American Scientists defines the M61 Vulcan as “a hydraulically driven, 6 barreled, rotary action, air cooled, electrically fired weapon, with selectable rates of fire of either 4000 or 6000 rounds per minute.” With that kind of incredible firepower, this angel of death has graced a variety of U.S. jet fighters since the 1950s, as well as the AC-130 gunship — it even felled 39 Soviet-made MiG’s during the Vietnam War.

To pull off this ridiculously awesome feat, Ryan partnered with companies like Hamilton & Sons, known for their involvement in restorations of large weapons and historical recreations, and Battlefield Vegas, which acquires rare equipment for the everyday bro or broette to use. Between Bureau of Alcohol, Tobacco, Firearms, and Explosives (ATF) licenses and the actual manufacturing and acquiring of weapons, the logistics for a video of this scale is neither inexpensive nor easy, so great sponsors were key.

With all that hard work in the rear view, Ryan took some…
Read more!

You can view the video from Black rifle coffee company below!