The MantisX is, quite simply, a very sensitive accelerometer. I say simply because this technology is actually pretty common. Your phone likely has one as does your car. What’s not simple are the algorithms used to interpret the data that comes out of it.

The out of the box thinking was the idea to mount one of these on your pistol to track even the smallest muzzle movements. Simply put, any movement involves acceleration. If one can measure that acceleration along multiple axes then direction can be known. Add in the time factor and distance can also be determined. If the software also knows which gun and how it’s attached, then movement detection accuracy becomes astonishing.

Ok, the tech is cool but how do I use it? What will it do for me?

Let’s go back to our student that’s hitting low and left. Assuming their sight picture is correct; somehow they are introducing movement during the trigger press. Obviously, there is a problem with their grip/trigger press mechanics and/or possibly a slight flinch. What can really help is some way to isolate the variables along with enough feedback to know when you’re getting it right.

I had this very issue with my first handgun until someone showed me the wall drill. That helped me to see what was actually happening during each trigger press. Well, imagine the MantisX as a hyper-sensitive wall drill that doesn’t rely on your vision but rather extremely sensitive electronics that will provide you with much more precise info.

Here’s how it works. Download the free App and go to the Setting tab and select the proper parameters for your situation. Then, mount the Mantis to your gun’s rail, press a small button to turn it on, place the gun on a solid surface, make sure Bluetooth is turned on and hit the Connect button on your screen. After a brief calibration, a shot wheel will display. Press the Start button and the sensor will begin recording the movement of each trigger actuation.

Since we are dry firing to start, triple check that your firearm is empty and cleared, be sure there is no live ammo anywhere near your training room and follow all of the normal safety rules.

Following each trigger pull, the screen will display a score from 0 to 100 and a red bar around the center score circle that indicates both the direction and magnitude of any movement during the trigger press. After a few dry fire shots you’ll quickly begin so see any patterns to any movements you might have.

While each shot score will give you a general idea of how steady you are, it’s the trace view that will really tell the story by showing three colored traces. The green shows your hold from a half second before the trigger starts to move. The yellow shows movement during trigger pull and a red X shows where the shot would have landed followed by a red trace that shows follow through/recoil movement for 5/100th second.

The traces, which are actually a series of connected dots, are displayed on a target where each ring represents 1/8th degree of angular movement and each dot represents 1/100th second of time.

What will quickly become obvious is that your hold is not as steady as you think it is and movement during the trigger pull is not usually in just one direction. It’s not uncommon to see trigger movement change direction (even doubling back on itself) several times during the cycle.

Live fire works very much the same way and will also clearly show any recoil anticipation and how well recoil is controlled.

The software is remarkable. I had zero issues with false readings by racking the slide, clicking the safety, etc. It somehow only recognizes trigger movement and the striker hitting in dry fire mode and of course a live round in live fire mode.

Mantis says the internal battery should last as much as eight hours and recharge time via a mini USB is about 2 hours from empty.

Updates to the software are ongoing and free so you’ll have any new features as they become available. The sensor itself does not need to be updated so this is a onetime purchase. At $149.00 on their website, the MantisX is not inexpensive but the software is free to download so one sensor unit can be shared among friends.

Aside from being a serious training tool that will instantly reveal even the slightest muzzle movements, the MantisX is also a good deal of fun as it pushes you to keep improving your scores. I’m going to have one on my class guns from now on. Highly recommended. 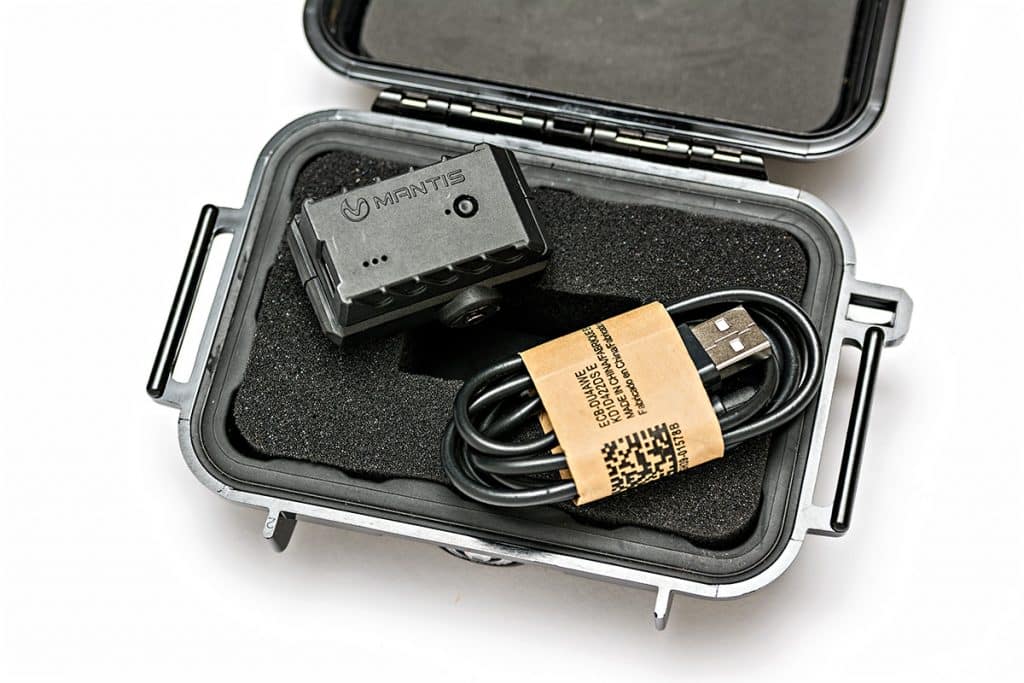 The MantisX ships in a Pelican Micro Case with a micro USB cord. The Pelican is total overkill but you will not have to worry about losing it in your range bag. 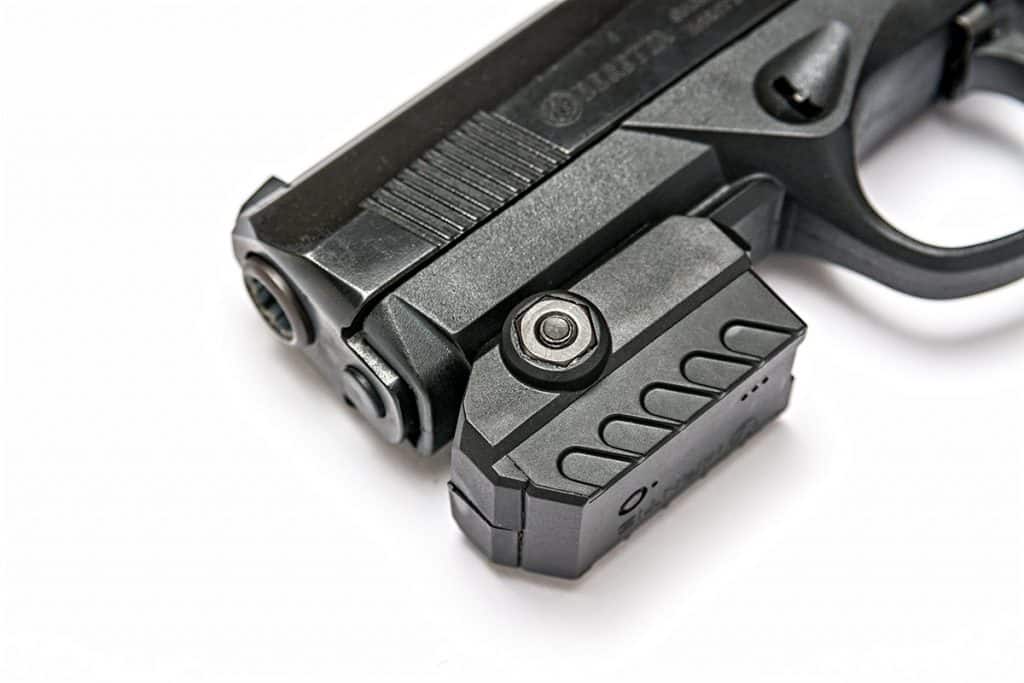 The MantisX attaches to any accessory rail and weighs almost nothing. You will not notice that it is there. 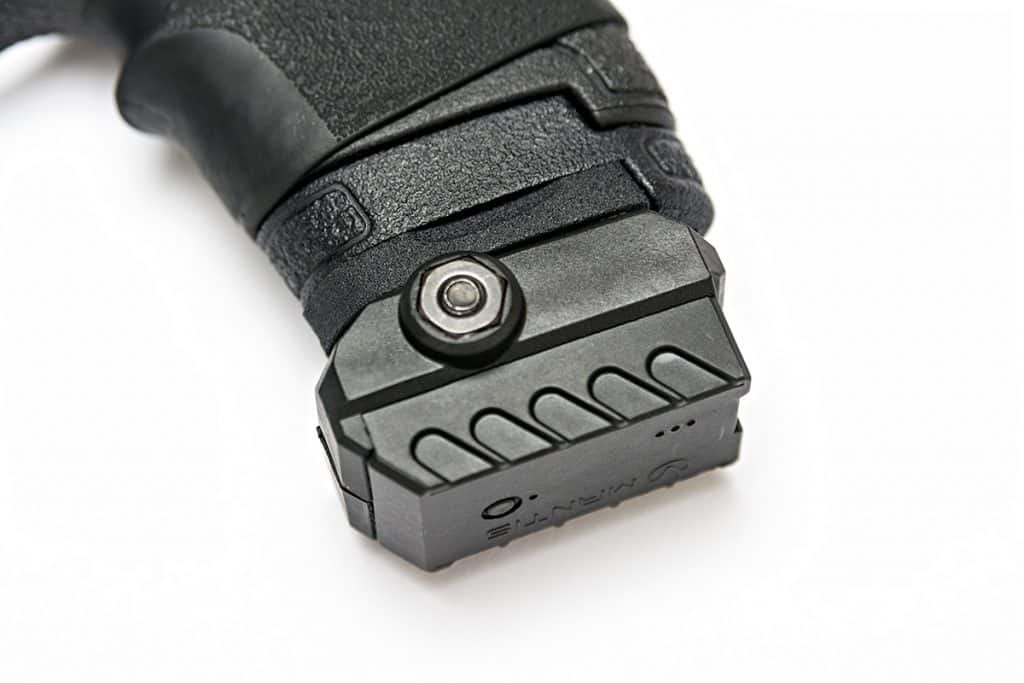 Don’t have a rail on your gun? Mantis sells magazine floor plates with rails attached for the more popular models. They also have a universal floor plate rail adapter for the guns they don’t have a mag adapter for. 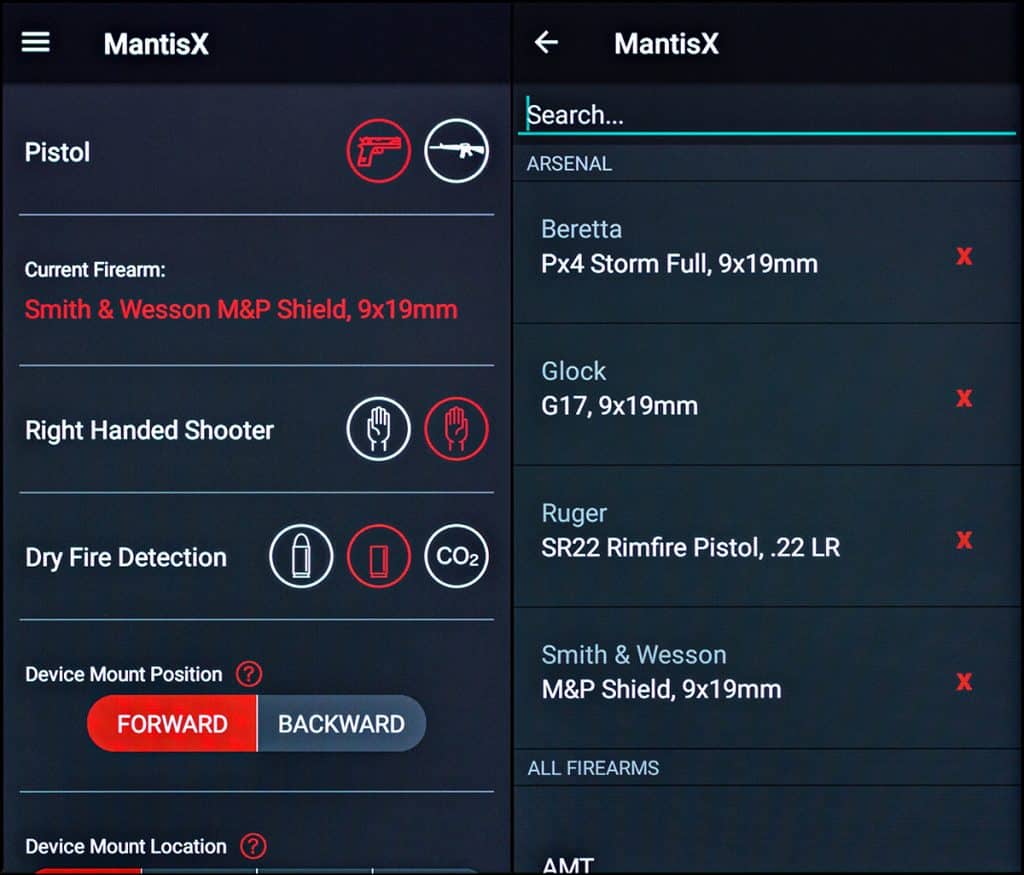 Setting up the app is super easy. Just select your parameters including your specific gun and you are ready to go. The app has 62 firearms manufactures listed so yours is likely there. You can also create your own arsenal so your guns are always at the top of the list. 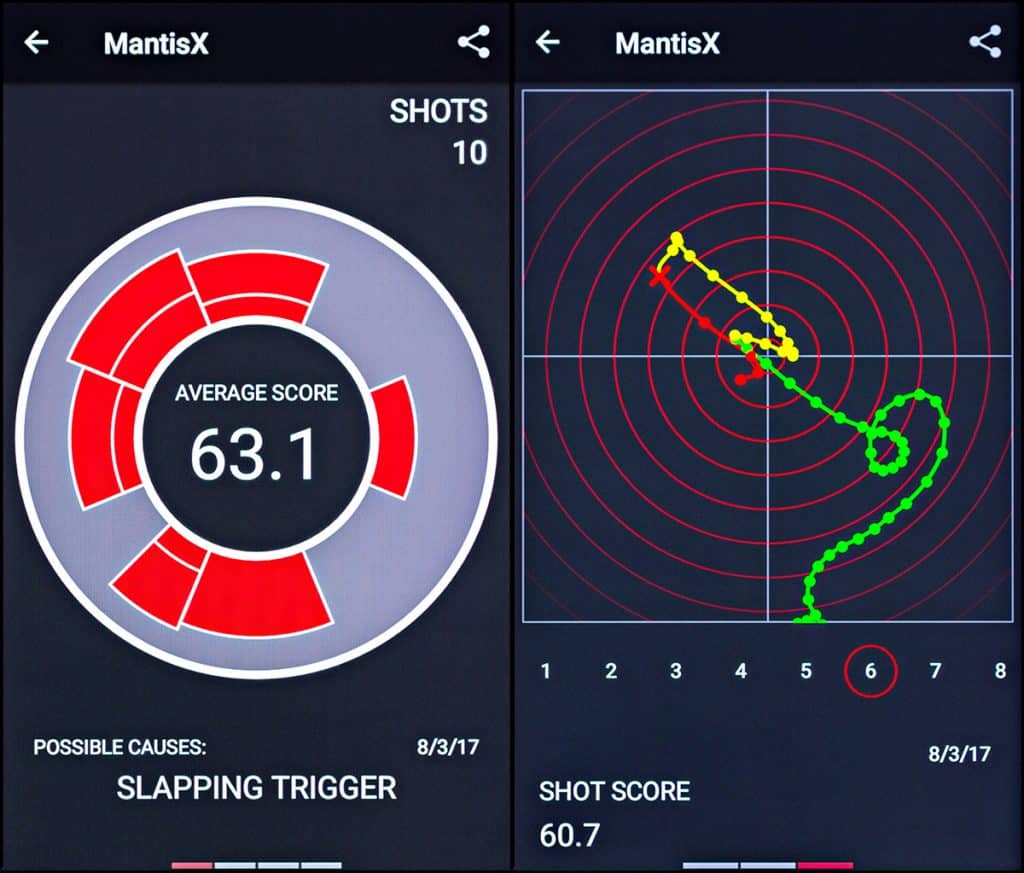 The score wheel shows your raw score in the center surrounded by red bars that indicate both the direction and magnitude of any trigger pull movement. The trace view breaks down your hold (green), trigger movement (yellow) and follow through or recoil (red). 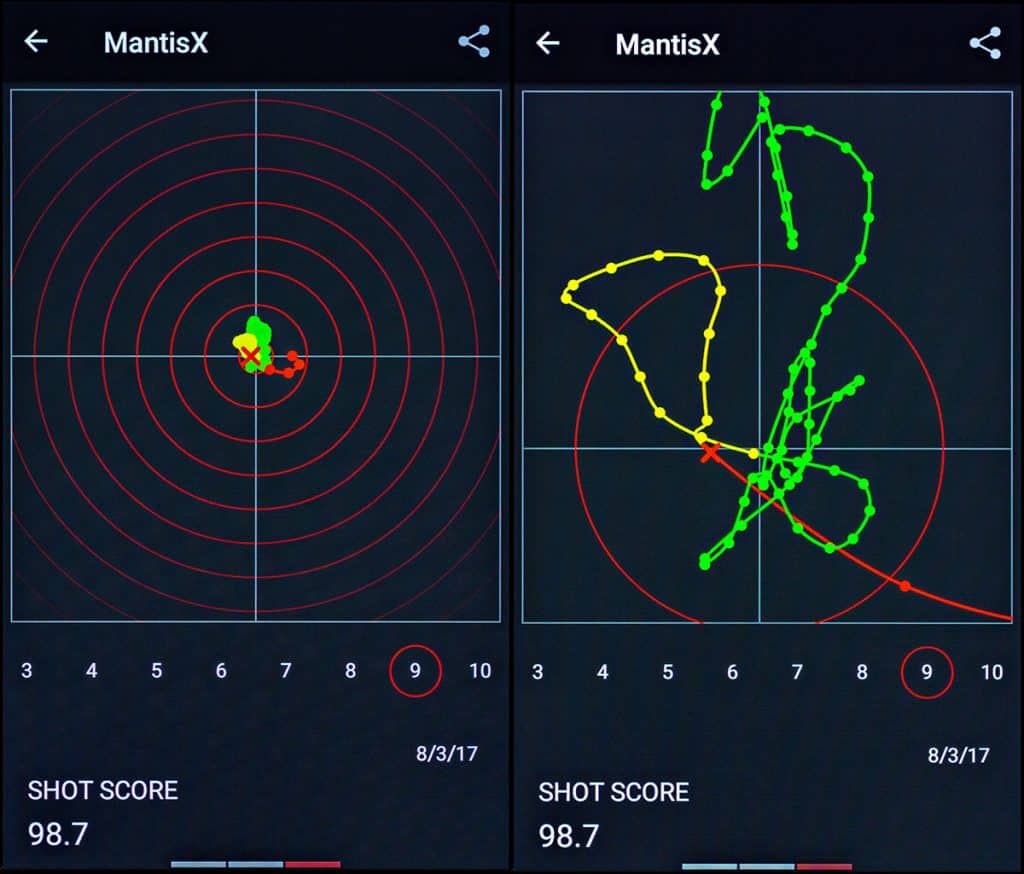 My best dry fire score was a 98.7. Looks like a tight, clean release until you zoom in and see that my muzzle movement formed a complete loop back to its starting point. 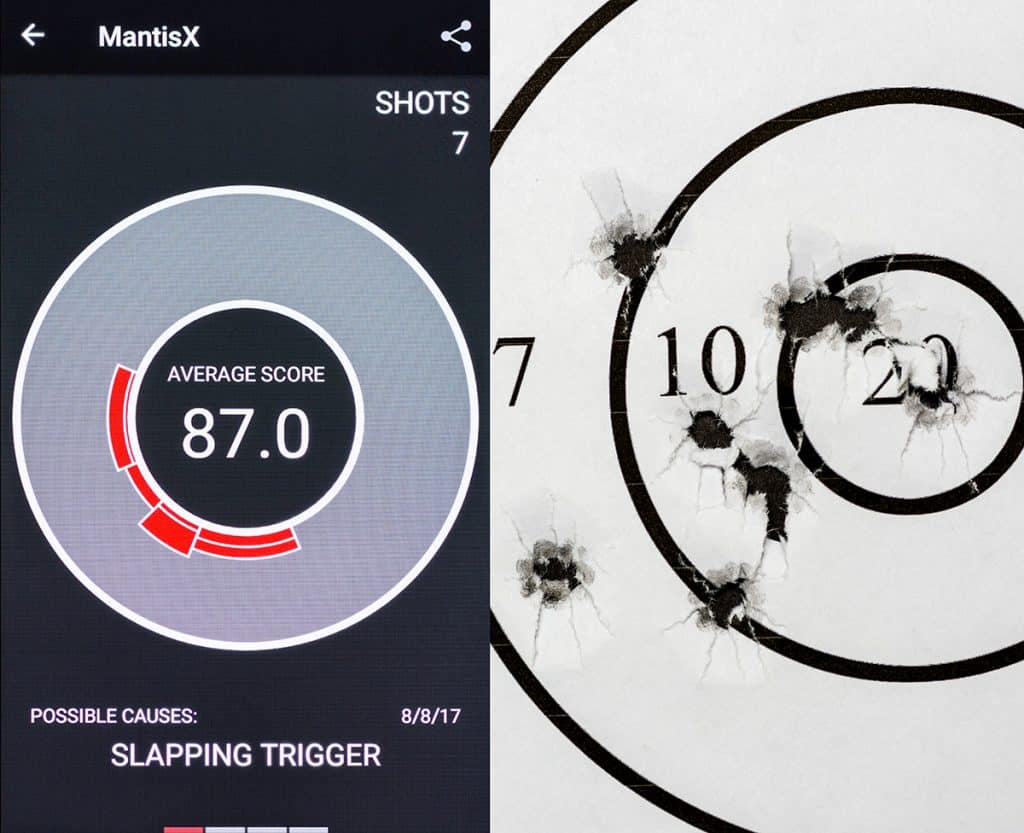 Here you can see the shot wheel alongside the actual target. Of course the MantisX doesn’t know your exact aim point but it did a pretty good job of predicting the shot placement and deviation from aim point. 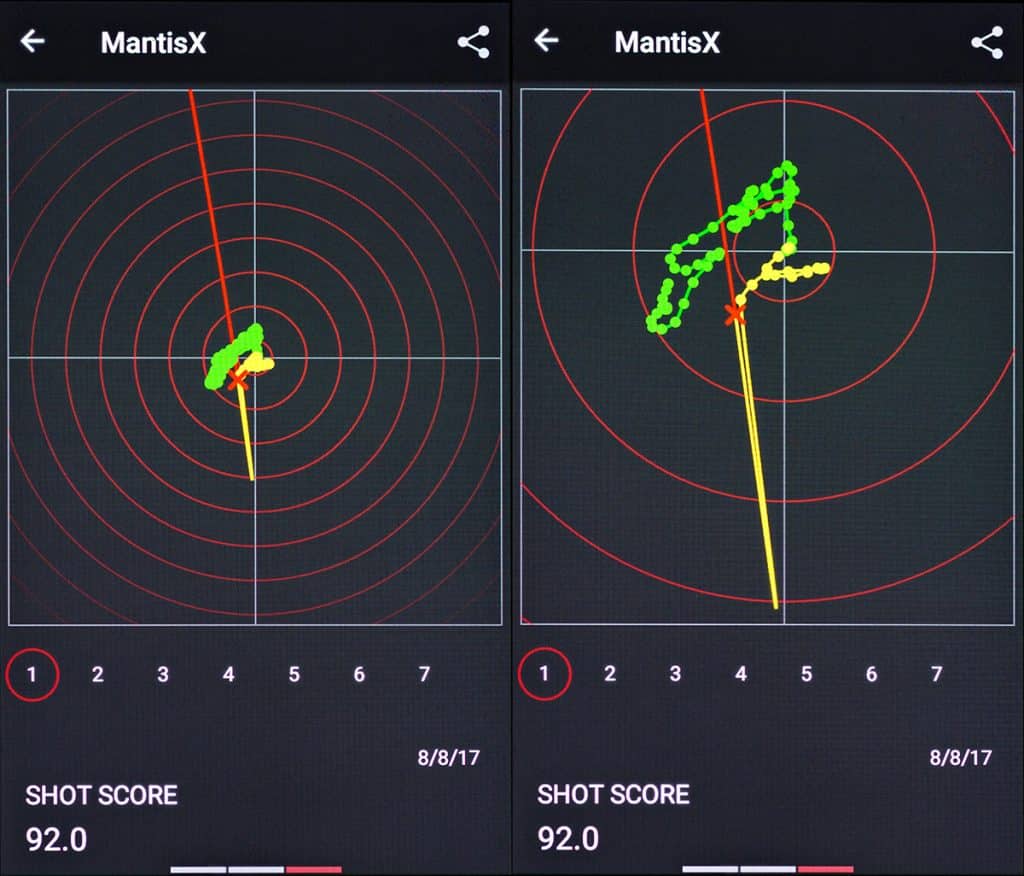 You can now order yours here!