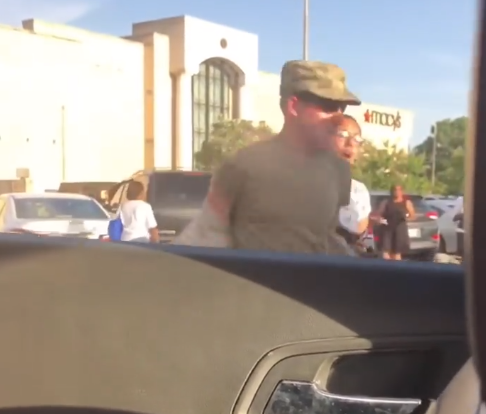 Gonna go out on a limb here and make the assumption that this guys career is over. A soldier can be seen berating civilians over a parking spot. However, when his wife steps in and tries to calm him down things get physical. They video went viral across social media and leadership is not fucking amused.
According to WSAV3 The soldier has been detained and is in military police custody after a video of an incident involving him was shared on Facebook.

The shared video shows a verbal altercation in a parking lot between the soldier and other drivers. According to the Facebook post, the argument was over a parking spot.

The soldier is seen screaming and cursing while packing a stroller into his car. He is also seen ripping his jacket and hat off and throwing them into the trunk.

A woman with him is shown trying to calm him down. He is seen grabbing her arm behind her back and pushing her. There is a child seen in the back seat of the vehicle.

WSAV reached out to Fort Stewart Hunter Army Airfield and received this statement:

3rd Infantry Division leadership is aware of an incident involving one of our soldiers captured on video yesterday. The soldier has been positively identified and has been detained. We are working with the appropriate civilian and military authorities to address this situation. This soldier’s behavior and actions are not condoned by the 3rd Infantry Division and are not in keeping with the values instilled in our Dogface soldiers or our Army.

Dammit ARMY you’re supposed to keep Kyle supplied with monsters so shit like this doesn’t happen!

All jokes aside Im pretty sure command is fucking livid.