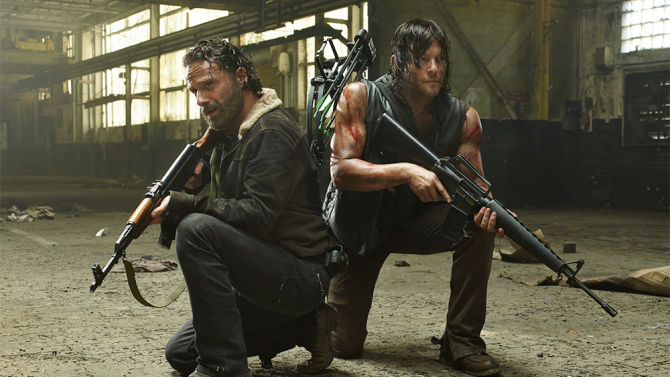 Weapons of the Walking Dead: Part 2

So much has happened since I last wrote the 1st Blog about the fine arsenal that is featured in what is one of my most favorite shows. AMC’s “The Walking Dead”! 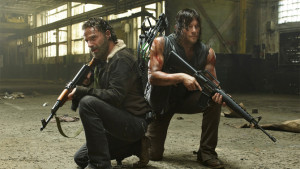 Here are Rick and Daryl rocking two of my favorite firearms on the planet! The AK-47 and the M16 A1!

The AK-47 is a selective-fire, gas-operated 7.62×39mm assault rifle, first developed in the Soviet Union by Mikhail Kalashnikov. It is officially known in the Soviet documentation as Avtomat Kalashnikova (Russian: Автомат Калашникова). It is also known asKalashnikov, AK, or in Russian slang, Kalash.

Design work on the AK-47 began in the last year of World War II (1945). After the war in 1946, the AK-47 was presented for official military trials. In 1948, the fixed-stock version was introduced into active service with selected units of the Soviet Army. An early development of the design was the AKS (S—Skladnoy or “folding”), which was equipped with an underfolding metal shoulder stock. In 1949, the AK-47 was officially accepted by the Soviet Armed Forces[8] and used by the majority of the member states of the Warsaw Pact.

Even after six decades the model and its variants remain the most popular and widely used military rifles in the world because of their substantial reliability under harsh conditions, low production costs compared to contemporary Western weapons, availability in virtually every geographic region and ease of use. The AK-47 has been manufactured in many countries and has seen service with armed forces as well as irregular forces worldwide, and was the basis for developing many other types of individual and crew-served firearms. As of 2004, out of the estimated 500 million firearms worldwide, approximately 100 million belong to the Kalashnikov family, three-quarters of which are AK-47s. (Wikipedia)

I love the sheer reliability and durability of this firearm. You have to appreciate a weapon that you can bury in mud for three days, come back, brush it off and the thing still shoots. 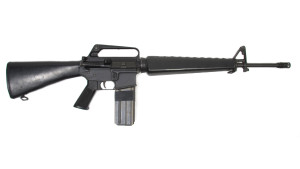 The M16 is a lightweight, 5.56 mm, air-cooled, gas-operated, magazine-fed assault rifle, with a rotating bolt, actuated by direct impingement gas operation. The rifle is made of steel, 7075 aluminum alloy, composite plastics and polymer materials.

ArmaLite sold its rights to the AR-15 to Colt in 1959.[14] The AR-15 was first adopted in 1962 by the United States Air Force, ultimately receiving the designation M16. The U.S. Army began to field the XM16E1 en masse in 1965 with most of them going to the Republic of Vietnam, and the newly organized and experimental Airmobile Divisions, the 1st Air Cavalry Division in particular. The U.S. Marine Corps in South Vietnam also experimented with the M16 rifle in combat during this period. This occurred in the early 1960s, with the Army issuing it in late 1964.[15] Commercial AR-15s were first issued to Special Forces troops in spring of 1964.[16]

The first issues of the rifle generated considerable controversy because the gun suffered from a jamming flaw known as “failure to extract”, which meant that a spent cartridge case remained lodged in the chamber after a bullet was fired.[17] According to a congressional report, the jamming was caused primarily by a change in gunpowder that was done without adequate testing and reflected a decision for which the safety of soldiers was a secondary consideration, away from what the designer specified, as well as telling troops the rifle was ‘self cleaning’ and at times failing to issue cleaning kits.[18] Due to the issue, reports of soldiers being wounded were directly linked to the M16, which many soldiers felt was unreliable compared to its precursor, the M14, which used stick powder, varying from the M16’s utilization of ball powder. (Wikipedia and weaponsystems.net http://weaponsystems.net/weapon.php?weapon=AA04%20-%20M16A1 )
There are many newly featured side arms in TWD this past 2 seasons, but one of my favorites has to be the HK USP! 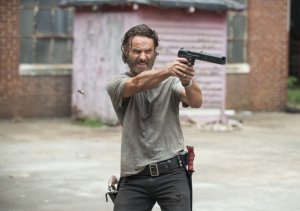 HK USP with a SWR Osprey suppressor.
Design work on a new family of pistols commenced in September 1989 focused primarily on the U.S. commercial and law enforcementmarkets. In 1991, USP prototypes participated in rigorous testing alongside H&K’s entry in the Offensive Handgun Weapon System (OHWS) program requested by the U.S. Special Operations Command (USSOCOM) and which would later result in the Mk 23 Mod 0.[1]The USP prototypes were then refined in 1992, based on input from the OHWS trials, and the design was finalized in December of the same year. The USP was formally introduced in January 1993[1] with the USP40 model (the base version) chambered for the increasingly popular .40 S&W cartridge, followed soon by the USP9 (using the 9x19mm Parabellum cartridge), and in May 1995—the USP45 (caliber.45 ACP).[1] 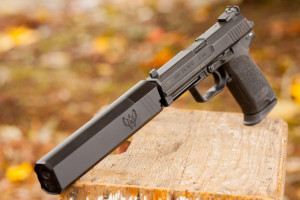 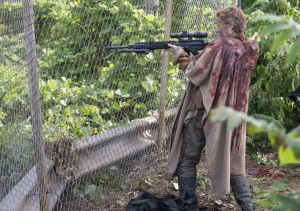 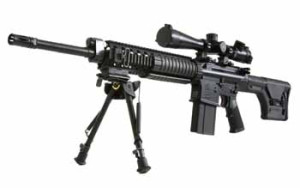 Man do I love a .308! This is where the AR platform TRULY Began!

The AR-10 is a 7.62×51mm NATO battle rifle developed by Eugene Stoner in the late 1950s at ArmaLite, then a division of the FairchildAircraft Corporation. When first introduced in 1956, the AR-10 used an innovative straight-line barrel/stock design with phenolic compositeand forged alloy parts resulting in a small arm significantly easier to control in automatic fire and over 1 lb (0.45 kg) lighter than other infantry rifles of the day.[1] Over its production life, the original AR-10 was built in relatively small numbers, with fewer than 9,900 rifles assembled.

In 1957, the basic AR-10 design was rescaled and substantially modified by ArmaLite to accommodate the .223 Remington cartridge, and given the designation AR-15.[2] ArmaLite licensed the AR-10 and AR-15 designs to Colt Firearms.[3] The AR-15 eventually became theM16 rifle.[4][5][6]