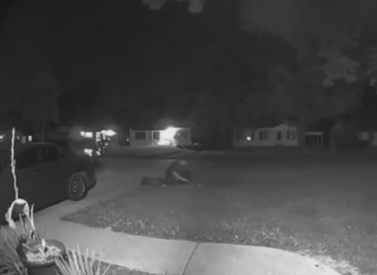 FLORISSANT, Mo. — A video from a Dellwood resident’s doorbell camera shows an unmarked Florissant police car striking a man who appears to be running away and then screaming as an officer gets on top of him to arrest him.

The video was first obtained and posted by Real STLNews Saturday and shows multiple officers at the scene around 11:30 on June 2 in the 9800 block of Eastdell Drive.

The view is partially obstructed by a car in a driveway, so it’s unclear which officer puts handcuffs on the man. The man can be seen falling to the ground and heard repeatedly screaming “I don’t have anything.”

A police helicopter spotlight also appears to be shining on the vehicle and chase.

In a news conference, Florissant police confirmed the detective driving the car has been suspended. There is no body cam footage, as detectives for the department do not wear body cameras.

Two other officers who were in the car have been placed on leave.

Florissant Police Chief Timothy Fagan said the pursuit began when the detective was monitoring a vehicle that matched a description of a vehicle the department had associated with a previous “shots fired” call.

A 20-year-old man was taken to the hospital with an ankle injury as a result of the incident. He was released.