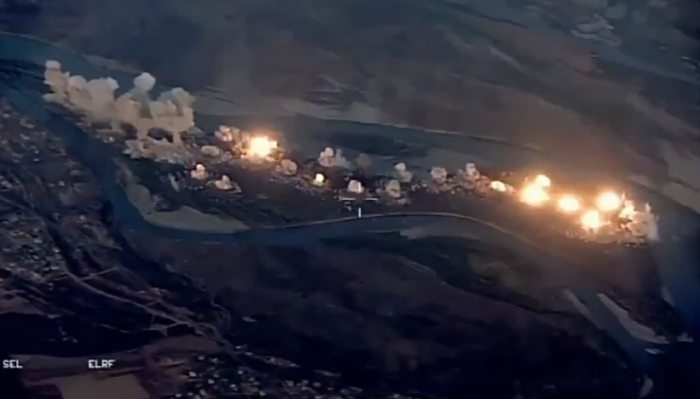 A video originally posted to twitter then published on FoxNews is getting a lot of attention as it shows U.S. jets bombing the ever living fuck out of an Island with infested rats… Isis. The Daesh are on the run and trying to hide anywhere they can. Fortunately, technology is working against them.

According to FoxNews U.S. jets bombed an ISIS-“infested island” in northern Iraq Tuesday, according to new video and a statement from the U.S.-led coalition battling the terrorist group.

More than 80,000 pounds of laser-guided bombs were dropped on the island located on the Tigris River south of Mosul, according to U.S. Army Col. Myles B. Caggins III, a spokesman for Operation Inherent Resolve, based in Baghdad.

U.S. officials called the island a “major transit hub” for ISIS fighters going in and out of Syria.

A tweet from OIR Spokesman Col. Myles B. Caggins, which aired the video, said: “Here’s what it looks like when @USAFCENT F15 and F35 jets drop 36,000kg of bombs on a Daesh [ISIS] infested island.”

U.S. jets have doubled the amount of bombs targeting ISIS in the past month, according to new strike data released from the U.S. Air Force…