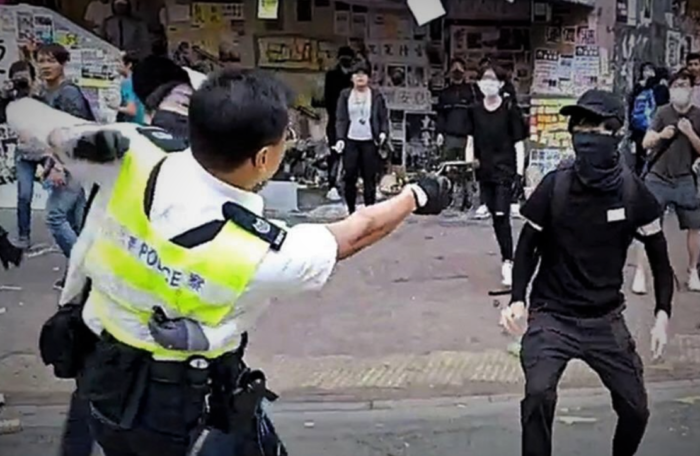 The situation in Hong Kong is getting worse. Several people have been shot by the police since we last reported the first victim on September 29. Unlike Antifa who constantly pushes a socialists agenda and constantly attacks people who believe in the freedoms we hold dear the protesters of Hong Kong are fighting to preserve their freedoms with many of them donning Pro American slogans and waving US flags.

Police have increasingly started resorting to violence against the protesters and another has been shot by the Hong Kong police simply for yelling at the officer.

Today morning in HongKong: The police reportedly fired three live rounds in the neighborhood of Sai Wan Ho. One young protester was shot, apparently unconscious, as pictures circulating widely on Telegram show. This is going to be another long, angry day.pic.twitter.com/dFEuYHFqQt

The Star Reports that a Hong Kong anti-government protester was shot by police in a dramatic scene caught on video as demonstrators blocked train lines and roads in a day of spiralling violence fuelled by demands for democratic reforms.

Elsewhere, a man was set on fire following an apparent dispute over national identity in the semi-autonomous Chinese territory, which has been wracked by five months of protests. The man was in critical condition in a city hospital.

The violence is likely to further inflame passions in Hong Kong after a student who fell during an earlier protest succumbed to his injuries on Friday and police arrested six pro-democracy lawmakers over the weekend.

Fuck Communism. Fuck Antifa. That is all.