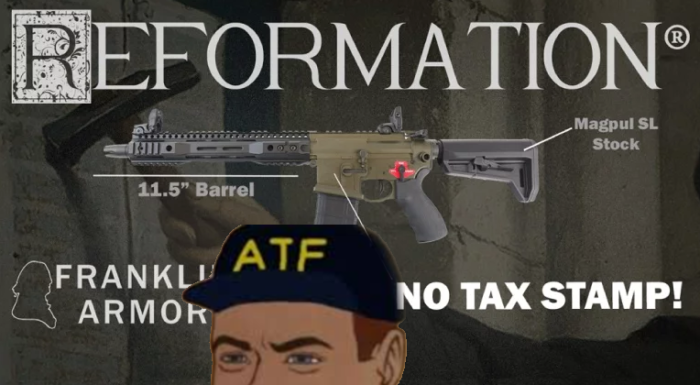 Seriously… Here we go again. Stop writing the ATF asking about things that are either a gray area or have already been approved. Remember when we could put vertical grips on a firearm so long as it was over 26 inches… well that got ruined because someone couldnt leave it alone and people started sending emails asking the ATF for clarification.

Now the same scenario has seemed to play out with the Franklin Armory Reformation….

We are aware of the ATF’s recent CHANGE of opinion regarding TRANFERS and INTERSTATE TRANSPORTATION of our Reformation® line of firearms. Our attorneys are evaluating this action currently. We will have a response shortly… • #reformation #franklinarmory #atf

What was the reformation? It was Franklin Armory’s “Firearm” that featured a 11.5 inch barrel and a stock. Similar to an SBR but did not require a tax stamp. How did they defeat the SBR status?

Franklin Armory took a unique approach to solve the problem of a “shortish” rifle that would require no tax stamp in certain areas or to give shooters who cross state lines an easy option to take their rifles with them by adapting straight-cut lands and grooves.  That means that the barrel imparts no spin on the projectile. According to ATF’s tech branch, this means that the Reformation is “not a rifle”. Therefore it got around getting hit with the title of SBR and since the barrel did have straight grooves it also avoided the SBS shotgun classification well did avoid…

According to TheTruthAboutGuns the Reformation is a new classification altogether…a GCA/SBS. This is so new that the ATF is having to gin up entirely new forms and procedures to handle it.

-That means that as of yesterday, FFL’s can no longer sell them until forms and procedures are in place

-While  it does not appear that the ATF will be pursuing Reformation shotguns that have already been sold to the public, Owners are only prohibited from transporting them across state lines.

Needless to say we are definitely interested to see how this one plays out.