When you shoot a 3 Gun Match in Texas, it is important to stay hydrated.  If you are properly hydrated, than you will spend plenty of time looking for a Johnny on the spot between stages.  Tactical Shit understands the need for copious amounts of clean, shitters between stages.  We also believe wholeheartedly in the mission of the DC Project and the 50 women that represent us in Washington, so we are proud to do what we can to further their mission.

We have donated cash and raffle items to cover the expense of the Johnny on the Spots that will be onsite for the June 7th even!

For more information on the event and the DC Project check out the Press Release below!

THE DC PROJECT TEAM MATCH
RAISING FUNDS FOR SECOND AMENDMENT ADVOCACY
Match Supports Women Traveling to D.C. for Meetings on Capitol Hill
Tulsa, OK, U.S. – (June 4, 2019) – Firearms enthusiasts and competitive shooters from across the U.S. are preparing for the D.C. Project Team Match to be held June 7 through 9 at the Reveille Peak Ranch in Burnet, Texas. The two-person, team match is a fundraiser for the D.C. Project Foundation, and will feature John “Tig” Tiegen, and Jerry Miculek as competitors. In addition to the match, a “BANGquet” is scheduled for Friday, June 7 with live-fire opportunities including machine guns starting at 3 p.m., and a 6 p.m. dinner with entertainment, raffles, and a live auction featuring firearms and shooting gear. 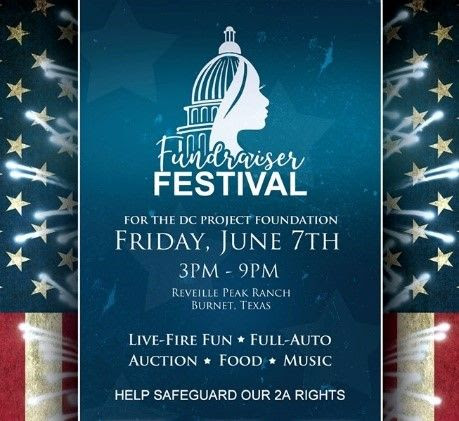 Founded in 2015, the nonpartisan D.C. Project Foundation gathers women of all ages and backgrounds from every state in the country to Washington, D.C. where they meet with legislators on Capitol Hill, share their stories of Second Amendment advocacy, and build a bridge of communication on behalf of all gun owners.
According to D.C. Project Foundation founder and professional shooter Dianna Muller, “The weekend kicks off on Friday with full-auto fun, immediately followed by the BANGquet. It’s open to the public, and we encourage you to get tickets and join us. What better way to help the D.C. Project Foundation raise funds to help women champion the Second Amendment on Capitol Hill, than good, old-fashioned trigger time?”
Friends and sponsors from the shooting industry have contributed a lot to this fundraising event, said Muller, and “everyone who participates will go home with fun memories, and possibly some impressive firearms and shooting gear. We’ve got raffle and auction items from Benelli, F-1 Firearms LLC, HIPERFIRE, Kahr Firearms Group, Magpul Industries Corp., STI International, Streamlight, Uberti USA, and many more!”
“When we visit Washington, D.C. every summer to express our support and reverence of the Second Amendment, we volunteer our time and our dimes,” Muller explained. “Our fundraising goal is to cover the lodging fees for the D.C. Project participant’s July 2019 trip. It’s such a big financial commitment from the women to travel there and meet with our legislators in terms of both cost and time.”
“We strive to present the diverse faces of American women who own guns to our representatives, plus help educate them as to why gun ownership is as important as ever to women,” Muller added.
Check out the Match Facebook page to see some of the auction and raffle items, and visit www.dcproject.info to purchase tickets to the BANGquet. For more information about the D.C. Project, please visit www.dcproject.info. To make donations, please visit www.dcproject.info/donation.
About the D.C. Project Foundation
The D.C. Project Foundation is an educational and bipartisan effort of 50 women, one from each state, meeting legislators on Capitol Hill as gun owners and Second Amendment supporters. Each summer more than 50 women of various ages, backgrounds, and ethnicities spend four days meeting with members of the Unites States Senate and House of Representatives to advocate for the Second Amendment as female gun owners on behalf of all Americans.
Media Contact: Dianna Muller
Email: di@pro3gunner.com
Phone: 918-695-7343
They’ve even released a few videos highlighting the details and what to expect going into the stages!
Share this Shit: