The Saudi student who shot and killed three people at a US naval base in Florida hosted a dinner party the night before the attack where he and others watched videos of mass shootings, according to the Associated Press, citing a US official. 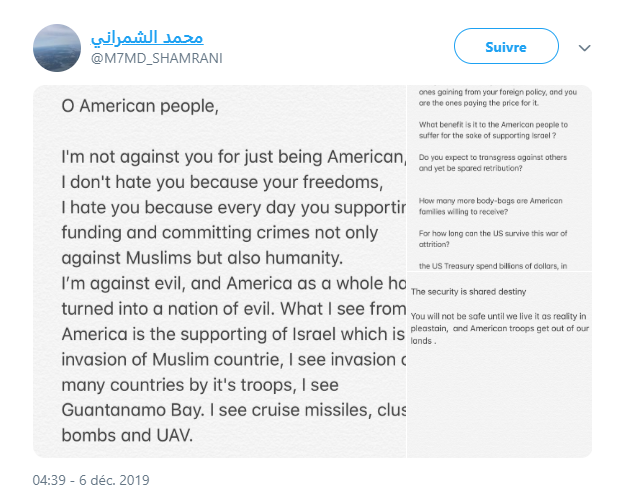 The New York Times reports that six other Saudis were detained after the shooting and three of those six allegedly filmed the shooting as it unfolded in Pensacola.

I’m very concerned that the shooter in Pensacola was a foreign national training on a US base.

Today, I’m calling for a full review of the US military programs to train foreign nationals on American soil. We shouldn’t be providing military training to people who wish us harm. pic.twitter.com/JkypdikYI9

According to CBS News Sources have confirmed the suspect was a Saudi aviation student, CBS News chief justice and homeland security correspondent Jeff Pegues reports. The FBI is now taking over the investigation.

NAS Pensacola is on lockdown right now because of a reported active shooter on the base. Authorities say please stay away.

This video is from a listener who saw police passing him on the highway. pic.twitter.com/GiW7tKsjso

Two people were killed at the scene while a third victim died after being rushed to a local hospital. Seven others suffered injuries and are undergoing treatment, including the two officers, one of whom was shot in the arm and the other in the knee. Both are expected to survive.

“This is a tragic day for the city of Pensacola… we are a military town, our hearts and prayers are connected to all those that serve us every single day,” the city’s mayor, Grover Robinson, told reporters during a press conference Friday. “We will overcome this, but today this is certainly a tragic day”