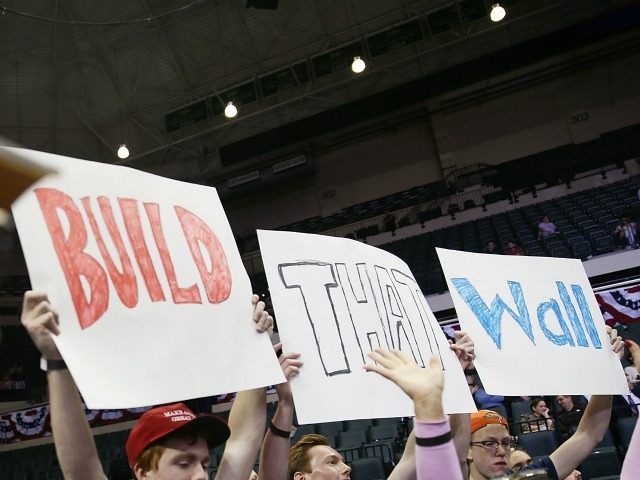 The Trump administration’s self-imposed deadline to start building prototypes for the border wall has passed—and so far, no contracts have been awarded.

According to documents obtained by the San Diego Union Tribune:

Homeland Security had planned to begin construction on four to eight 30-foot tall prototypes Thursday near Otay Mesa. The location was still a dusty field this week, and Customs and Border Protection, responding to a Freedom of Information Act request from the San Diego Union-Tribune, said no contracts have been awarded.

Border Protection spokesman Rick Pauza confirmed Friday that bids are still being reviewed but that prototype designs “will be selected for construction in Summer 2017.

The border wall was the signature promise of Trump’s campaign and the most visible initiative of his presidency, yet has been allowed to fall behind schedule.

Just this past week, Breitbart News reported that “President Donald Trump tweeted on Thursday about the high death toll in Mexico because of the drug cartels operating in that country, vowing to ‘build the wall.’”

Despite delays, the president has continued to offer new ideas, such as a solar panel skin to cut down on costs and produce more green energy. (Not that California needs anymore solar energy — its energy grid is unable to process the solar power online now, and frequently has to “dump” energy, paying neighboring states like Arizona to take it.)

According to The Hill, “Trump reaffirmed his pledge to build the wall during a campaign rally in Iowa this week, also floating the idea of a ‘solar wall’ that would ‘pay for itself.’ He hopes to complete construction by the end of his first term.”

Cost is likely to be another potential delaying factor.

One of Trump’s tech supporters, virtual reality pioneer and Oculus Rift founder Palmer Luckey, is pushing an idea that is gaining traction and could help keep costs down.

Luckey’s company, according to a CNBC report, is “developing surveillance technology that could be deployed on borders between countries and around military bases.”

Whatever prototype the Trump Administration approves is sure to generate a tremendous amount of opposition from the open borders lobby, currently working overtime to undermine any type of wall securing the southern border with Mexico.

Tim Donnelly is a former California State Assemblyman and author, currently on a book tour for his new book: Patriot Not Politician: Win or Go Homeless. He ran for governor in 2014.