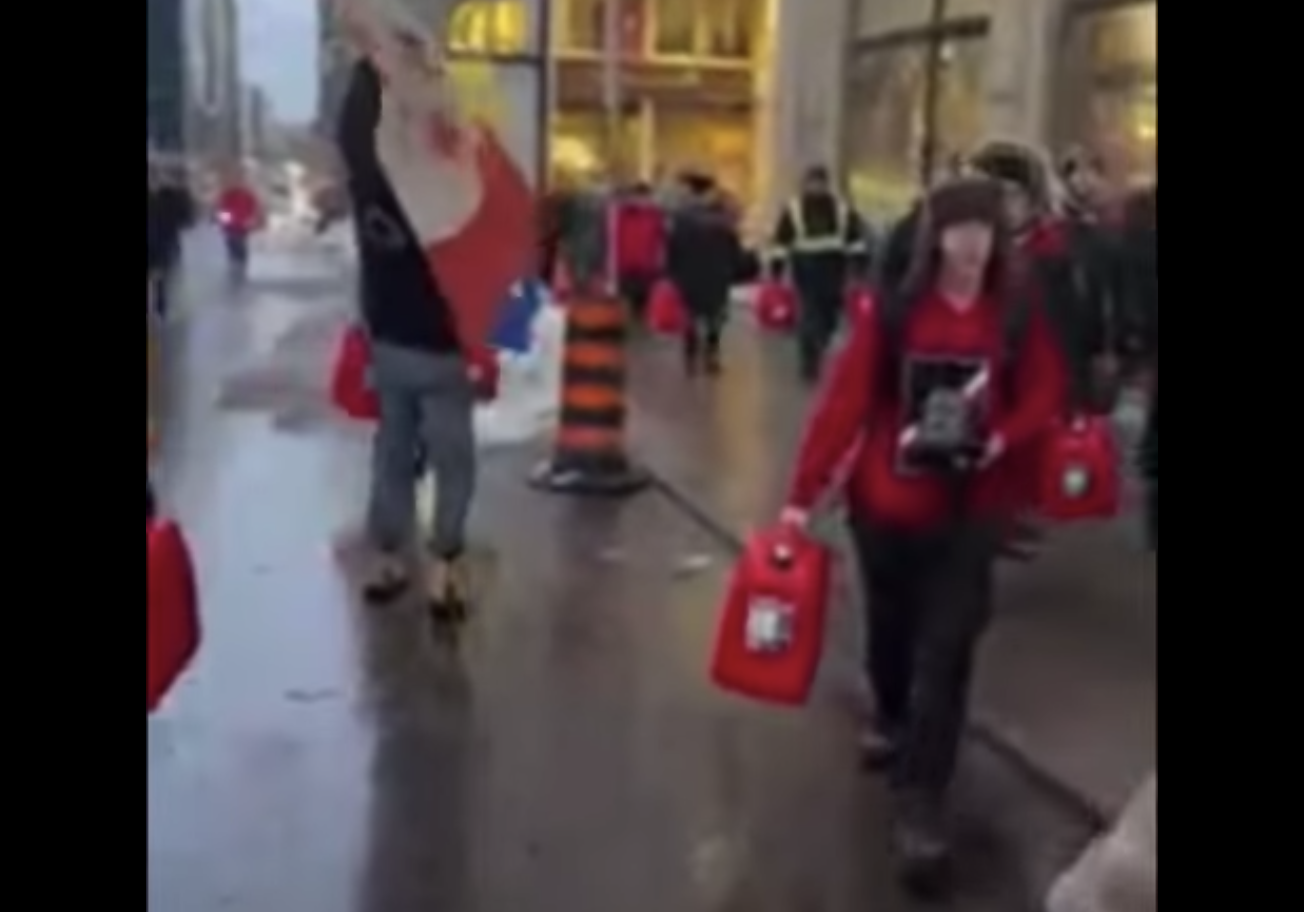 Residents in cold Ottawa Canada were filmed carrying empty gas cans around the city in an effort to confuse authorities who were told not to assist the truckers protesting in the city.

The Ottawa mayor threatened anyone with a gas can offering material support to the truck drivers, so this is how Ottawa responded. pic.twitter.com/HQEde1KZbr

On Feb. 7 a Canadian judge issued a 10-day injunction banning protesting truckers and their supporters from honking their horns in downtown Ottawa.

Justice Hugh McLean of the Ottawa Superior Court said on Monday, “Tooting a horn is not an expression of any great thought I’m aware of,” before handing down the decision.

In addition to the honking of horns protesters have set up bouncy castles for children, held impromptu dance parties and played street hockey in front of Canada’s parliament.

Following the injunction it appears the truckers protesting in Ottawa have complied with the order. Numerous live streams broadcast on YouTube show a significantly quieter downtown environment than what has been witnessed in over a week of sustained protests.

The injunction follows Ottawa Mayor Jim Watson declaring an official “state of emergency” on Sunday Feb. 6 when he said that the protests posed a “serious danger and threat to the safety and security of residents.”

Lawyer, Paul Champ, who is representing residents of the city of Ottawa in a proposed class-action lawsuit says that the honking has caused harm to city residents.

Leading the potential class-action is Ottawa resident Zexi Li, who filed a statement of claim  on Friday Feb. 4 at the Ontario Superior Court of Justice. The suit is seeking $4.8 million in damages for private nuisance and an additional $5 million in punitive damages.

Ottawa police are also attempting to cut off the trucker’s supply of fuel warning on Monday that “anyone found bringing fuel to the demonstration trucks in the red zone could be subject to arrest and charges.”

According to Ottawa police, “seven people have been arrested and more than 100 have been issued tickets in connection to ‘demonstration-related enforcement.’” A video has surfaced online showing a young man being arrested for carrying a Jerry can.

The simple Jerry can has become a symbol of dissent in Canada’s capital after a single post went viral online stating, “One of the greatest trolls in history will take place tomorrow. If you live in Ottawa grab a jerry can and join the party. Everyone is gonna be walking around with one in protest. You don’t need gas. Just the jerry can.”

Protesters and their supporters are now trolling the Ottawa Police by carrying around empty Jerry cans or Jerry cans filled with liquids, other than fuel, including windshield washer fluid and water.