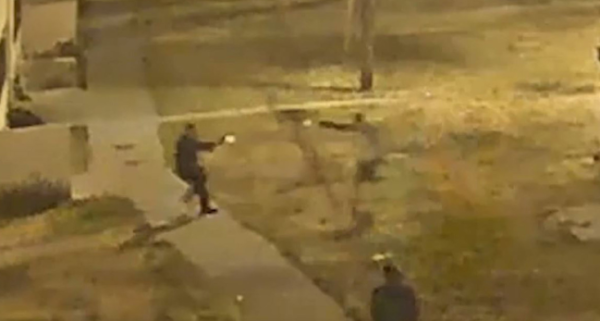 On April 20 LAPD Newton officers stopped a car for running a stop sign, the driver fled on foot & they gave chase. A random bystander then came out of nowhere & ambushed the officer shooting him at point-blank range. Fortunately, the officer survived this terrifying incident. The entire Incident was caught on body cam.

The Full Video can be seen below!

On April 20 LAPD Newton ofcrs stopped a car for running a stop sign, the driver fled on foot & they gave chase. A bystander then came out of nowhere & shot an ofcr at point-blank range. Fortunately, the ofcr survived this terrifying incident. Full video 🔗 https://t.co/zh9KXInqiT pic.twitter.com/WjCg4wJ9jn

Fox11 Reports that It all began on April 20 at about 9:20 p.m. when officers assigned to the Newton Gang Enforcement Detail saw a vehicle that blew past a stop sign and tried pulling the driver over. The officers followed the driver to a housing complex in the area of 51st Street, west of Holmes Avenue.

That’s where the driver exited the car and took off on foot with officers giving chase through the housing complex. During the foot pursuit, a second man, seen in the newly released video, approached the officers and opened fire.

The officer was hit by gunfire and immediately shot back at the suspect who fell down on the ground. Both received medical attention, police said.