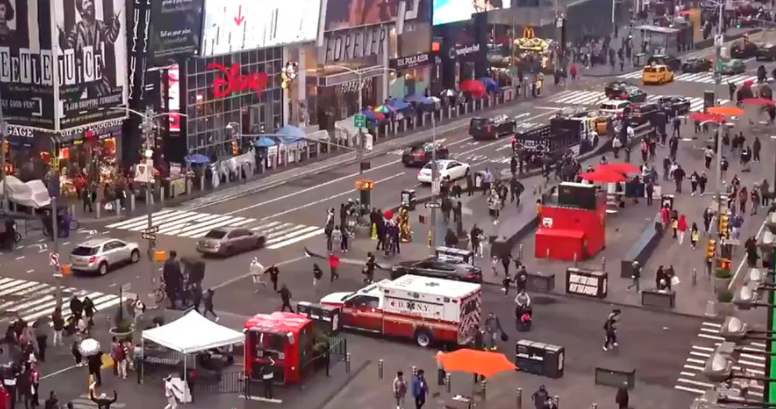 Shootings are up 83% in New York City compared to last year, but the Democrats in charge of all levels of government in the state don’t have any good ideas about driving down the violence. Instead, they’re locked and loaded into an anti-gun agenda that seeks to make it harder for law-abiding citizens to exercise their Second Amendment rights, even as violent offenders get away with murder.
On Saturday afternoon shots rang out in Times Square, leaving three people injured. According to NYPD Commissioner Dermot Shea, the shooting started as a “dispute” between a group of people, when one of them pulled a gun. None of those hit by the shots are believed to have been a part of that original dispute, and are being described by police as “bystanders”.

Authorities don’t have a suspect in custody, though two senior NYPD officials identified a 24-year old named Farrakhan Muhammed as a person of interest, saying that Muhammed allegedly tried to shoot his own brother but missed, striking the three innocent parties instead.

New York Mayor Bill de Blasio was quick to blame the shooting on the “flood of illegal guns” into New York City, while state Senator Brad Hoylman decided that the shooting was the fault of the gun industry.

“We have to crack down on guns at the federal and state level,” he said. “We need to… ensure that gun manufacturers are held liable for these type of tragedies.”

It’s absolutely despicable, though completely unsurprising, that Democrats like de Blasio and Hoylman are blaming the inanimate object used in the attack rather than say anything at all about the man police believe is responsible. According to the New York Post, Muhammed is no stranger to police, though it sounds like he’s managed to avoid serious consequences for his previous run-ins with the law.The suspect has been busted before, including last year for allegedly assaulting a random passerby who tried to intervene when Muhammad started hassling a couple on the street, sources said.

Muhammad allegedly pushed the good Samaritan into a trash can before the suspect’s buddy punched the victim in the face, sources said.

Democrats don’t want to talk about their failures of the criminal justice system and the light-on-crime approach that de Blasio and the party have adopted in recent years. Instead, they’re trying to change New York state law to allow lawsuits against gun companies virtually every time a gun is used in a crime. As we reported last month:

Democrats in New York are pushing a new piece of legislation designed to go around the federal Protection of Lawful Commerce in Arms Act and allow gun companies and other businesses in the firearms industry to be sued when a criminal misuses their product.

While the PLCAA is designed to prevent such junk lawsuits from being filed, State Sen. Zellnor Myrie of Brooklyn is pushing a bill that would allow lawsuits to be filed… as long as they use a particular legal argument.

Under Myrie’s legislation, gun makers could be sued for when a gun is used in a crime as long as the argument is that the company’s actions “recklessly create, maintain or contribute to a condition in New York state that endangers the safety or health of the public through the sale, manufacturing, importing, or marketing of” a firearm. It’s a move that’s designed to bankrupt the firearms industry and destroy the rights of law-abiding citizens to acquire new firearms, but it would have no impact whatsoever on the actual violent offenders who are shooting up the streets of New York with increasing impunity.

Criminals have no trouble whatsoever arming themselves illegally in New York. It’s the responsible citizens who want to abide by the law that are most impacted. They’re the ones who can’t carry a firearm for self-defense thanks to the state’s draconian gun licensing laws, while the average criminal has little to fear at the moment from either police or the criminal justice system. Thanks to the dominance of Democrats in the statehouse in Albany, there’s little hope of that changing anytime soon, and that’s bad news for everyone but the bad guys in New York.