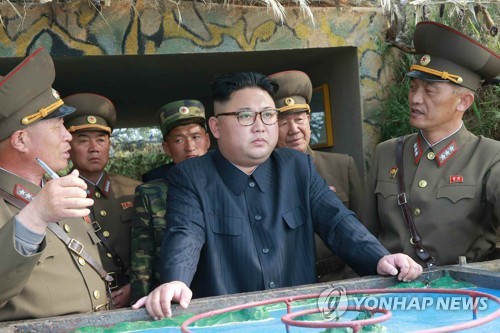 Kim Jong-un inspected the military units on Jangjae and Mu islets, which are located not far from South Korea’s front-line Yeongpyeong Island, according to the Korean Central News Agency (KCNA).

The KCNA said that Kim looked at the South Korean island at an observation post on Jangjae Islet, calling for combat readiness against its enemy.

After taking a report about South Korean military’s movements, Kim “acquainted and examined the plan for fire strike of the newly organized forces at the objects of the enemy,” the report said in English.

A South Korean military source said that Kim is believed to have visited the islets Thursday on a small vessel.

North Korea is known to deploy multiple rocket launchers and artillery pieces on the two islets. There is an artillery unit on Mu Islet, which attacked Yeongpyeong Island in 2010.

The inspection came amid heightened tensions on the Korean Peninsula over North Korea’s possible provocations.

The move is seen as aiming to counter the South Korean military’s boosting of combat readiness on islands in waters off the western coast.

A South Korean Marine Corps commander inspected front-line troops near the tense Western maritime border Thursday, saying that any provocations by North Korea will be retaliated against.

A set of front-line islands lie just below the Northern Limit Line (NLL), the de facto sea border with North Korea, near which bloody skirmishes between the two Koreas took place in recent years.