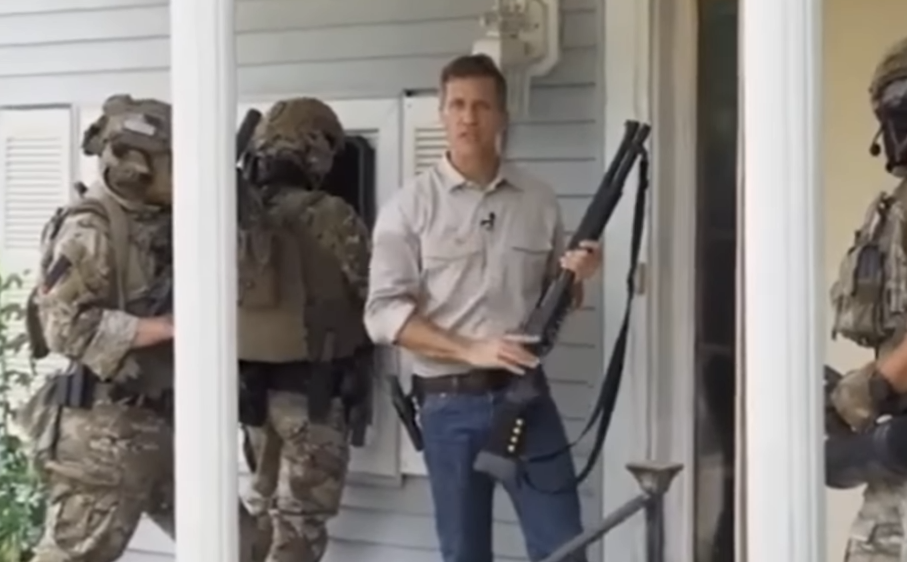 The Missouri Republican shared a 38-second video on Twitter where he touts his past as a Navy SEAL and is seen breaking into a house while going what he calls “RINO hunting.”

“The RINO feeds on corruption and is marked by the stripes of cowardice. … There’s no bagging limit, no tagging limit, and it doesn’t expire until we save our country,” he says in the video.

Greitens, who is seen holding a long shotgun for the duration of the video, is surrounded by men in U.S. armed forces camouflage uniforms. He also urged his supporters to join the “MAGA crew” and to get a “RINO hunting permit” after he rushed into an empty house while his crew tossed in a flash grenade.

He shared the video with a caption Monday that said, “we are sick and tired of the Republicans in Name Only surrendering to Joe Biden & the radical Left.”

Greitens, who calls himself a conservative and an “outsider,” faced swift retaliation on social media for alluding to hunting humans in the video.

What the lib Tards are saying

Matt Harris is an Assistant Political Science Professor at Park University. He’s seen ads like this in the past, but none this extreme.

“That’s what he’s talking about, hunting members of the Republican party that are not supportive of former President Trump,” Harris said.

“It’s not hunting, it’s not target practice, it’s him and a handful of dudes in military garb kicking a door down – bag ’em and tag ’em and all this kind of stuff,” Harris said. “So, I think it was more explicit, but I think this kind of continues in the lineage of these ads that we’ve seen.”

“I think what Greitens is sort of banking on here is hey, this is going to play to a subset of the GOP, very right-wing group,” Harris said, “and if I can get 30%-35% , that’s enough to get me a general election.”

“There’s RINO, Republican in Name Only, but there’s also an animal. If it had been like we’re on safari or something, that might be a little different, but I think the fact that it was him and some dudes kicking a door to a house down and going it,” Harris said. “It was sort of very, explicitly violent.”

What The Rhinos Are Saying

Rep. Ruben Gallego (D-Ariz.) took to Twitter to denounce the video and said that “this type of fa[s]cist messaging needs to stop. It only encourages political violence.”

Rep. Joaquin Castro (D-Texas)also said on Twitter that “this is sociopathic.” He added that Greitens was “going to get someone killed.”