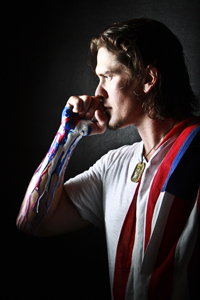 I just got off the phone with probably one of the coolest Musicians I have ever interviewed. If you don’t know who David Bray is, or who the band Madison Rising are, it is my distinct pleasure to educate you.  Their music video with their version of the “Star Spangled Banner” by Sir Francis Scott Keyes ; has over 4.6 MILLION hits on YouTube!

These Patriots are amazing musicians with a love of our Country and her citizenry. With a Constitutionalist approach, they rock out! “Many artists start with a message, but then lose their way for fear of their reputation being tarnished..” Bray says. “Right out of the gate, we decided that this is who we are and what we stand for. We have not deterred and we will not. You can make great music and still have a message.” 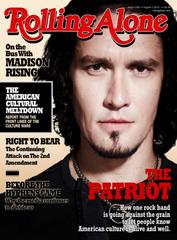 Aside from being a Patriot with conviction, David Bray is a loving husband, father and veteran. Not just any Veteran, Bray was an 8404 Hospital Corpsman assigned to 2nd Battalion, 2nd Marines STA platoon. I was also an 8404 Hospital Corpsman, having been assigned to the Marines, so David and I talked for quite a while swapping sea stories. We talked mostly about how poorly the Veterans of this country are treated. About the horrendous medical care we receive and the bureaucratic red tape bull shit we have to go through to get benefits. “We have brothers and sisters coming home with mental battle scars and they receive no help. I call it PTS not PTSD. I don’t think that this is a disorder. It is a living thing that happens to people who have been to war. It has happened for centuries. Our brothers in WWII, Korea, Viet Nam and even the men and women today fight this. Let’s get them the help they so desperately need. We have men and women who have fought for this country that come home and can’t get the help they need; so they brush their teeth with a pistol… it’s not right.” Bray said. 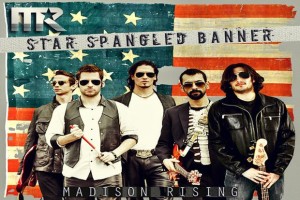 David has many music influences that vary from classic rock like Led Zeppelin and Pink Floyd; spanning through the decades to include Bob Seger and more modern bands like Five Finger Death Punch. Which is one of my top 5 favorite bands of all time.

Madison Risings new album “American Hero” will be released on November 5th! “dedicated to the men and women of our armed forces, along with the police, firefighters and other first responders whose sacrifice and selfless dedication to the service of this country, at home and abroad..”

I asked Bray how excited he was about the new album to get a response I was elated to hear. “The album is a ‘front to back’r’. It’s one of those CD’s that you listen too from start to finish without skipping tracks. Kind of like an old mix tape that you and a bunch of buddies would jam out to back in the day..” The album according to Bray , has phenomenal versions of, “America the Beautiful” and “God Bless America” and a powerful song about PTS called “Reflection”. Another song to pay attention too is called “Come to the Ready” a true and bold message that needs to be heard. I know what it says, but I am not going to spoil the surprise.

Bray is a HUGE advocate for the 2nd amendment! MR’s song “Right to Bear” is a powerful message. Bray is a Sig Sauer fan but varies his carry piece depending on things like weather and situations. “Some times, you just need to blow off steam. Go to the range and putting some rounds down range can be very therapeutic..” Bray says. I agree. http://www.youtube.com/watch?v=2cQ7ldhD05E

I really enjoyed talking with David and I am very eager to get the new album! Check it out Patriots!

GO TO www.madisonrising.com and check them out!

God Bless and God Bless the Republic of the United States!

Check out my other published works on KINDLE