Lady Gaga is being criticized for sharing a pro-Biden video in which she posed near a pickup truck wearing camouflage while chugging a beer in an apparent effort to pander to working-class Americans.

The singer shared the bizarre video on Twitter Saturday, days before she was scheduled to appear alongside the Democratic presidential candidate at a Pennsylvania rally on Monday. The video, which many found to be condescending, shows Gaga wearing full camouflage except for a pair of knee-high black-and-pink boots. Her T-shirt is knotted up to her chest, revealing her abs as she leans casually against a black truck.

“Hey, this is Lady Gaga, I’m voting for America, which means I’m voting for Joe Biden,” she says after cracking the beer open. “And if you live in Minnesota, Pennsylvania, Georgia, Michigan, Florida or Arizona, I encourage you to vote. And if you have a friend who lives there, tell them to vote.”

She added: “I’m going to be in one of these states tomorrow. Guess which one I’ll be in. Hint: I used to live there.”

She concludes the video by taking a big sip of the beer before smashing it on the ground in front of her.

Hours later, she followed up the video with a photo of herself from the time she used to live in Lancaster, Pa., in which she’s seen sipping from a beer can as well as a photo of her hugging former Vice President Joe Biden.

“That’s a pic of me in Pennsylvania when I lived in Lancaster. I LOVE THIS STATE. I’m here now! This place is filled with good hearted people—good hearted people that @JoeBiden loves. He’s a good friend. He’s the President this country needs to bring us back together,” she captioned the post. 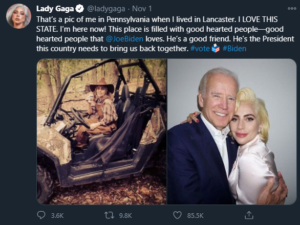 It didn’t take long for followers to bash the 34-year-old singer for what many viewed as a condescending parody of rural Americans.

“Stunts like this, are exactly why Trump is going to win. Average, hardworking Americans are sick of “celebrities” mocking them for what they wear, drive, eat, drink, and where they choose to work or live,” one user wrote.

“Love ya Gaga but this Vid is Cringe AF 😬 it feels insincere & literally makes me not want to vote at all. I honestly wish you never got involved in politics publicly because it’s distracting from the Power of your Musical & Performing Talents ✨Politics is a Dirty Game Sis,” a third person wrote.

“Pretty sure this isn’t sending the message you think it is … lol,” another said.

Gaga lending her celebrity to Biden in Pennsylvania caught the attention of the Trump campaign. The campaign’s communications director Tim Murtaugh tweeted a lengthy statement in which he accused Gaga of being anti-fracking, a core issue affecting voters in the state.