The next time you head to the range, look where the other shooter’s shots are impacting their targets. I guarantee that you will find an overwhelming number of misses below the aiming area. Why is that? Are they jerking the trigger or are their sights off? The sights probably aren’t off. Saying the shooter is jerking the trigger isn’t usually accurate because there are almost always more body parts than the trigger finger causing the gun to move during the shot process. Here’s what is happening. 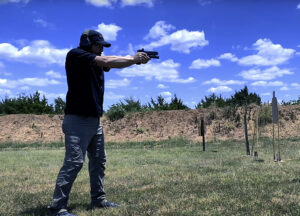 usly and subconsciously, the shooter understands that the handgun is going to recoil when the trigger is pressed. Through firing the gun, the shooter gains an understanding of how much and at what angles, the gun recoils. Then the shooters begin compensating for recoil as it relates to the jump angle of the handgun. We typically see the incorrect movement during the trigger press to be roughly the equal and opposite distance of recoil. The shooter whose grip and stance most often results in a high right recoil will often hit low left if they are fighting the recoil that hasn’t occurred yet.

Additionally, the anticipation of recoil isn’t necessarily a bad thing. If done in the proper sequence, it’s great. The proper sequence is not while the trigger is being pressed but during recoil instead. We often see world champion shooters move their gun down in a manner that looks like they are anticipating recoil. They do this on a failure to fire or empty gun that didn’t slide lock. Those high-level competitors aren’t anticipating recoil prior to the shot and during the trigger press. They are moving the gun at the time in which recoil would have been occurring. Maybe more on that in a later video. Until then, this quick video explains why you are missing with a handgun and what to stop doing so you can stop missing.

Daniel Shaw is the Chief instructor of Gunmag Training and host of The MagLife Podcast.