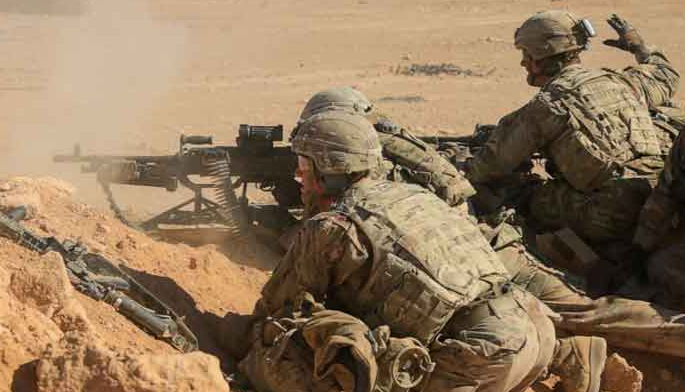 The DailyMail reports that the U.S. is to send 1,000 more troops to the Middle East amid mounting tensions with Iran late Monday – as the Pentagon released new photos that officials say show the country’s Revolutionary Guard were responsible for attacks last week on two oil tankers near the Persian Gulf.

Shanahan stepped up the rhetoric on the alleged Iranian role in the tanker attacks, saying that they ‘validate the reliable, credible intelligence we have received on hostile behavior by Iranian forces and their proxy groups that threaten United States personnel and interests across the region.’

He said ‘the United States does not seek conflict with Iran’ but added that the deployment was to ‘protect our national interests.’

‘The action today is being taken to ensure the safety and welfare of our military personnel working throughout the region and to protect our national interests,’

According to Breitbart Iran denied carrying out the attacks, but British Foreign Secretary Jeremy Hunt also said the attacks were “almost certainly” carried out by Tehran. A BBC reporter also tweeted a UK Foreign Office source had said, “We strongly agree with the US assessment,” according to Reuters.

You may remember that a few weeks ago b52s departed Barksdale Air Force base bound for the middle east, days ago houthi backed rebels vandalized Saudi oil tankers and launched a sophisticated drone strike on a Saudi pipeline and hours ago all non essential emergency personnel have been ordered out of Iraq! All of these things seem to be indicators leading up to something bigger. Could we soon be going to war with Iran?

Foxnews reports that U.S. officials would only order diplomats to leave the American embassy in Iraq “if there had been an imminent threat,” Senate Armed Services Committee Member Joni Ernst said.

The State Department on Wednesday ordered all non-emergency personnel at the embassy and consulate to leave the country amid rising tensions between the U.S. and Iran.

The order comes amid a standoff between the U.S. and Iran, which has recently threatened to pull out of the nuclear deal and resume higher uranium enrichment if no new deal is put in place.

“The dynamics are ever-changing, Harris,” Ernst, R-Iowa, told “Outnumbered Overtime” host Harris Faulkner on Wednesday. “And, we know that they would only evacuate those non-essential personnel from the embassy if there had been an imminent threat. We see this as very real. Our personnel are always, always on guard.”

The evacuation comes as tensions with neighboring Iran continue to escalate according to Funker530. Just days ago, Iran-backed Houthi insurgents struck a major Saudi pipeline with attack drones, and at least four ships were sabotaged off the coast of the United Arab Emirates (UAE), including two Saudi oil tankers.

In order to develop a drone like this and carry out the strikes, the Houthis would need a team of highly trained aeronautics engineers, software experts, satellite communication professionals, weapons specialists, and pilots.

They have to be getting this technology and training from somewhere, and given their use of Iranian Qasef-1 drone clones in the past, it doesn’t take a genius to pin the tail on Iran… Read more!

Is a war with Iran about to kick off? Let us know what you think in the comments!