New York once again outdoes California with its anti gun bullshit. We’re guessing that the handgun may have had one or two too many rounds and now the state of New York is trampling upon the constitution and ruining another innocent persons life.

FoxNews reports that a 64-year-old New York state man who fatally shot a pair of prowlers rooting through his home Tuesday afternoon reportedly ended up in handcuffs after police said the weapon he used in self-defense was illegally owned.

Ronald A. Stolarczyk was charged with felony possession of an illegal handgun, New York State Police said in a news release.

At about 2:40 p.m., officials say Stolarczyk interrupted a man and woman burglarizing his home in Deerfield, New York, located about four hours north of New York City. Stolarczyk then shot the two suspects, according to police. 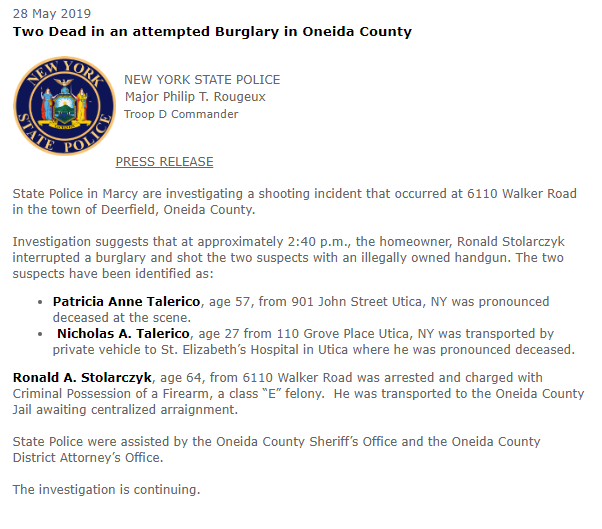 According to LocalSYR the man and woman went to the home, started knocking on the door and the homeowner, Ronald Stolarczyk, 64, according to police, interrupted the burglary and shot at them with an illegally owned handgun.

“The word that we had originally was a possible home invasion, possible suspect running at large,” said Trooper Jack Keller with New York State Police. ‘We were able to quickly identify who those people were identified as, they weren’t turned out later was one of the victims but also we were able to determine quickly that there was no one else and the public was not in danger at all.”

Stolarczyk is charged with criminal possession of a firearm, and…