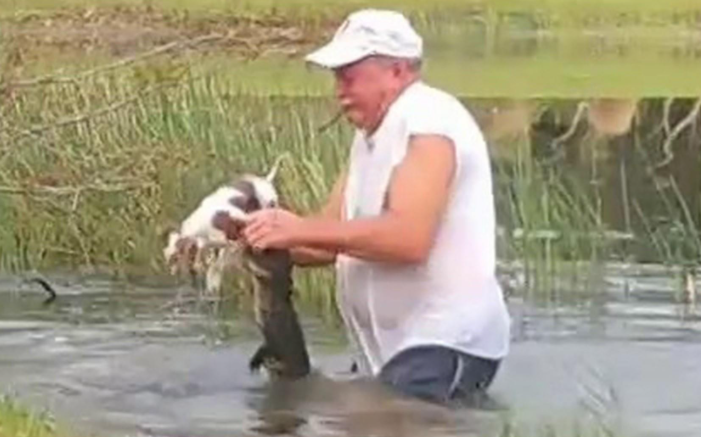 A Florida man saved his dog in style, snatching it from the jaws of an alligator without dropping his cigar.

The video of Richard Wilbanks, 74, went viral, showing him jump into a pond to pull his 3-month-old puppy, Gunner, away from the alligator.

“We were just out for a Sunday morning stroll, and walking by the edge of the pond,” Wilbanks told Fox News. “All of a sudden an alligator came out from under the water and grabbed hold of Gunner and was heading back in the water and swimming off with him.”

“I just jumped in and got hold of the alligator and drug him up, drug him up to the bank and got Gunner out.”

Wilbanks said that he acted on instinct and jumped in to save his dog, wrestling with the small alligator, which he claimed was no problem.

“Just my luck, Gunner only had the one puncture wound,” Wilbanks said.

A camera put in place by the Florida Wildlife Federation in conjunction with the fStop Foundation captured the incident.

Wilbanks and his wife, Louise, said they appreciate the efforts of the two groups, and their campaign, called “Sharing the Landscape.”

“It gives us a new appreciation,” Louise Wilbanks told WINK. “We do need to be aware they are wild animals. They’re not here for our benefit. We’re very lucky to share this space with them.”

Wilbanks said he understands that he was walking around the gator’s home and that it was just doing what it needed to survive. He didn’t call the Florida Fish and Wildlife Conservation Commission over the incident because he wanted to leave the alligator alone.

Wilbanks said he had a few puncture wounds on his hands, and he got a tetanus shot just to be safe.

Gunner, meanwhile, is healing well after a trip to the vet’s office.

“I would like to emphasize for people that have pets to make sure that they keep them away from the edge of the water,” Wilbanks said.