The FBI is offering a reward of as much as $10,000 for information leading to the arrest and conviction of a robber dubbed the “Scream Bandit” after a string of armed robberies of gas stations. 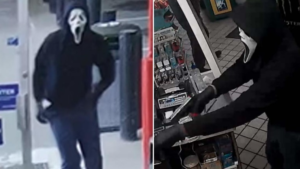 The wanted man has eluded law enforcement for more than a year, carrying out robberies in Virginia wearing a mask from the 1996 horror film “Scream,” according to the FBI poster.
Three of the robberies took place in January and February of last year, and three of them occurred last month, the FBI said. All took place in Richmond or nearby Henrico County and North Chesterfield.
Continue Reading
Share this Shit: